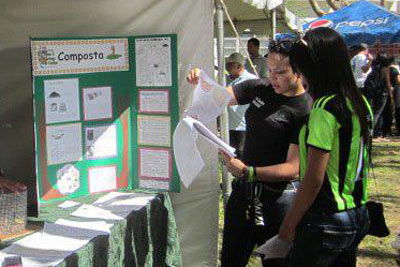 Provided
A compost fair held as part of a joint outreach effort in Puerto Rico between the Cornell Waste Management Institute and the Syracuse Center of Excellence in Environmental and Energy Systems.

Puerto Rico is facing a dirty dilemma: The island is literally running out of places to put its garbage.

Its existing landfills are filling up at an astonishing clip, and there's nowhere else to put more. There were 64 landfills on the 3,515-square-mile island in 1994; by 2020, there are expected to be just four.

The Cornell Waste Management Institute (CWMI) has teamed up with the Syracuse Center of Excellence in Environmental and Energy Systems to help address the problem.

CWMI director and extension associate Jean Bonhotal and extension support specialist Mary Schwarz recently conducted trainings in Puerto Rico with 50 college students, who are now spreading the gospel of reduce, reuse and recycle to elementary schools, groups and clubs across the island.

"Up to 60 percent of the waste stream in Puerto Rico is made up of food scraps and other organic materials that could be composted on site or in a municipal facility," Bonhotal said. "The infrastructure just hasn't been built there."

According to an analysis by Syracuse University, Puerto Ricans also produce more garbage -- 3.9 pounds per person per day, on average -- compared with 3.15 pounds on the mainland.

The reason, Bonhotal said, is because there is no tradition, information or infrastructure to encourage waste reduction in Puerto Rico.

Thus, the Cornell trainings addressed waste management and led a hands-on composting workshop, building worm bins, wire bins and a used-pallet bin. They also included a composting curriculum developed by CWMI in both English and Spanish, for students in grades K-12.

"There's a big push to do waste reduction and diversion," she said of Puerto Rican communities.

While the original goal was to train 10 college students, 50 showed up, from six universities across the island.

Bonhotal said the college students began working in schools even before the group had left Puerto Rico.

"We expect the ripple effect from this will be more than just getting this information to the schools," Bonhotal said. "The 50 students who have been trained will go home and have a compost bin in their yards. The schoolchildren will go home and show their parents. That's what we hope for."

The project was part of a larger grant awarded to Syracuse University from the U.S. Department of Agriculture.