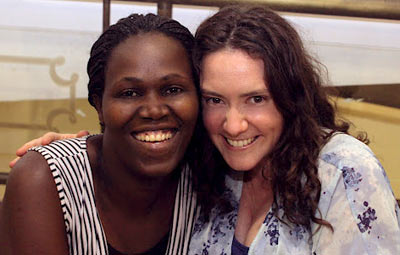 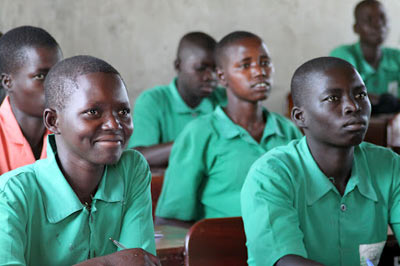 There's only one place in northern Uganda where girls who are pregnant or have children can be educated: Pader Girls Academy. Cornell graduate students are helping the academy to better implement its plan to become a center of academic excellence.

Pader was founded in 2002 to help girls who were raped and sometimes abducted by soldiers led by fugitive rebel commander Joseph Kony of "Kony 2012" fame. Most of the school's 300 students live on campus with 84 infants.

Although Kony has left the war-torn region, Pader still struggles to educate its students and even to feed them. Meals consist of porridge, rice and beans -- not enough for breastfeeding mothers. A four-month dry season makes water scarce, too.

CIPA fellow Meaghan Charkowick was the first link with Pader. Before coming to Cornell, she had worked for a Ugandan nonprofit that funds Pader. "It was those visits to the school and getting to know its founder, Alice Achan, that inspired me to apply to graduate school," she said. "I sought professional and academic training to become more effective in service to girls affected by war."

Charkowick proposed that Pader be the client for the capstone course; instructor Laurie Miller agreed.

The course offers second-year CIPA fellows the chance to work on a real-world project. This spring, they developed plans to help Pader achieve its strategic, academic and financial goals, Miller said.

The 25 fellows in the capstone class spent the semester writing a strategic plan that included fundraising and identifying Ugandan and U.S. partners and supporters. They also developed plans to realize Pader's academic vision.

Their recommendations include ways to help the young mothers create an onsite preschool and kindergarten for their children, expand the agricultural education to teach students to farm and stabilize the school's food supply, and expand the school's reproductive health education program.

In March five CIPA fellows traveled to Uganda to present the class's recommendations and ask for feedback. "In this age of phones, email, text and Skype, there is still no substitute for face time. A few hours with Alice and her team were more valuable than months of research," Charkowick said.

The CIPA fellows also met with potential partners with similar programming, including Gulu University, also in northern Uganda. CIPA fellow Ashley Hollister was surprised at how open the vice chancellor and faculty members in education, agriculture and computer sciences were to collaborating with Pader.

"Within just a few meetings, the entire grant proposal transformed from four separate programs into one consolidated proposal that could have great regional impact on the reconstruction and rehabilitation of northern Uganda," she said.

The CIPA students' biggest challenge was understanding the impact that war and violence has had on the Pader students and how the school's location constrains its development, said Miller.

But the implications of the project "are extraordinary," she added. "If the proposals are funded, Pader will be able to expand its programs to support additional opportunities for the students and their children now and in their lives after they leave."

For Charkowick, the significance of collaborating with a woman-founded institution that empowers vulnerable girls to become change agents for women's rights, especially in a region where sexual abuse is widespread, cannot be overstated.

"We study international development here on a hill in Ithaca," she said. "It's so important to then get on the ground and contextualize the significance and challenges of our work."