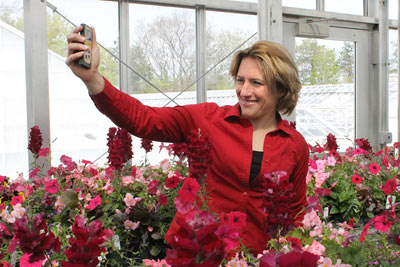 Light and dirt can make all the difference when it comes to growing plants, stress scientists at the Cornell University Agricultural Experiment Station (CUAES). Yet many researchers fail to consider these factors when they develop their studies, says greenhouse manager Andy Leed.

Leed showed what a difference potting mix can make at a March open house for researchers across campus. Arabidopsis is the plant of choice for researchers seeking insights in genetics and molecular biology because of its unusually small genome and short life cycle. Leed showed off four flats of the plant that boasted a vigorous carpet of healthy plants. But their sister plants in the other three flats were limping along. Some had barely begun to germinate.

"I saw a lot of raised eyebrows," Leed says. The striking differences in plant growth had nothing to do with introduced pathogens or poor germination -- and everything to do with the simplest of factors: the potting mix.

Leed's mission: to educate researchers about do's and don'ts of successful research. For example, researchers "need to know if the potting medium they use is compatible with their crop and irrigation protocol. The only way is to run a comparison," he says.

At the end of the hallway, Melissa Brechner, an extension associate in biological and horticultural engineering, was illuminating visitors on another underappreciated factor: light. For consistent results during the dark days of winter, researchers use supplemental light to provide plants with the conditions they need to grow. But when they set up their experiments, many use light meters that measure light the way humans see it rather than the way plants use it to define their experiments and describe their results.

Light meters calibrated for people, not plants, overestimate the light plants are receiving, she said.

"You can't really replicate someone's experiments," Brechner says, "if their measurements are flawed."

Brechner is part of a Cornell team, headed by Professors Lou Albright and Bob Langhans, that's designing new, highly efficient ways to control how much light plants get each day. Their method is "more consistent," says Brechner, "than the typical lights-on, lights-off schedule. This takes Mother Nature out of the equation as a variable in every experiment."

Fundamental to these practices is using a meter that measures photosynthetically active radiation, or PAR for short. Brechner takes her message (and her meters) to growers and teachers statewide. She also runs internships for students interested in hydroponics, a growing method relying heavily on providing the right light at the right time.

Brechner says that most of her horticultural colleagues now use PAR to manage and measure light intensity. But the protocols developed by her team are just beginning to make inroads among geneticists, plant breeders and other researchers around the world.

Proper light, proper growing medium -- it's all part of the sustainability spectrum, says Glenn Evans, director of operations for CUAES. "Cornell's greenhouses are home to hundreds of projects every year," he says, noting that CUAES manages 164 greenhouse units. "We are working hard to become one of the most sustainably run research greenhouse operations in the world." Efficiently optimizing every aspect of plant growth, which includes running experiments others can replicate and learn from, Evans says, "is essential to true sustainability."

Mary Woodsen is a science writer for the Cornell University Agricultural Experiment Station.