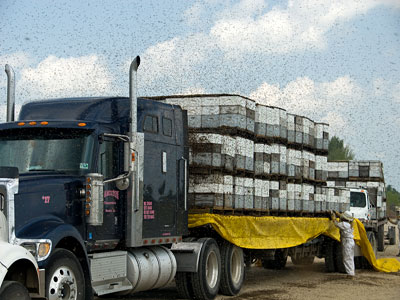 Nicholas Calderone
A truckload of honeybee colonies is delivered for lowbush blueberry pollination in Downeast, Maine. 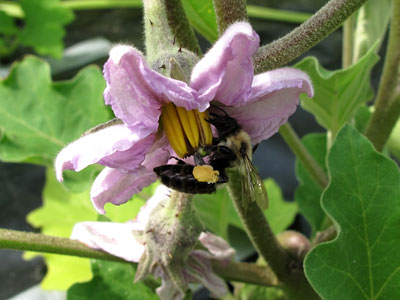 Nicholas Calderone
A bumblebee on an eggplant.

Bees and other insects that pollinate plants in the United States have suffered in recent decades from mites, pesticides, pathogens, land development and habitat fragmentation. Nevertheless, production of insect-pollinated crops has mostly increased this century. Now, new research shows that insect pollinators' value to farmers may be hard to replace.

According to a Cornell study published in the May 22 issue of the journal Public Library of Science ONE, crops pollinated by honeybees and other insects contributed $29 billion to farm income in 2010.

"This lets people for the first time look at a peer-reviewed paper that says here are the revenues derived from these crops, and if we want to keep producing [these crops], we have to recognize the importance of insect pollinators," said Nicholas Calderone, associate professor of entomology and the paper's author.

The paper also analyzed trends in various metrics from 1992 to 2009 for crops that depend on pollinators. For directly dependent crops, production, cultivated area and revenues increased steadily over the course of the study period, with some slowing over the past few years. Recently, growth in the U.S. population has outpaced the production of these crops, suggesting a growing dependence on imported food, but also, a possible opportunity for U.S. growers.

Over this same period, the number of managed honeybee colonies in the United States has gradually declined, reaching a low in 2008 with 2.3 million colonies, with increases of roughly 200,000 new colonies each year in 2009 and 2010.

The trends show that any shortfall in managed or wild pollinators could seriously threaten production levels of directly and indirectly pollinated crops, according to the paper.

In the mid-1980s, parasitic mites that had infected eastern honeybees in Southeast Asia began infecting western honeybees in the United States. In 2006-07, beekeepers experienced heavy losses to their colonies. While mites appear to be the cause of roughly 70 percent of the losses, the remaining losses (referred to as colony collapse disorder) are not fully understood, with possible explanations including pesticide use, beekeeper management practices, climate change and other pathogens, reports the paper.

As a hedge, U.S. growers are working to increase the number of non-honeybee pollinators, including horn-faced bees and orchard bees, Calderone said.

Crop, insect pollinator and economic data were provided by the U.S. Department of Agriculture's National Agricultural Statistics Service, whose website is run through Cornell's Mann Library.

The study was funded in part by a grant from the National Honey Board.