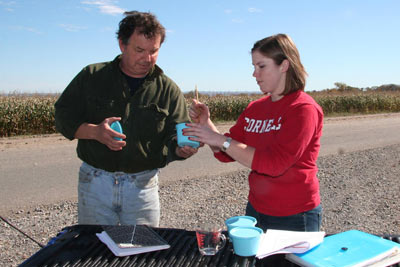 Elson Shields, professor of entomology, and the Northern New York Agricultural Development Program have battled the invasive farm crop pest since 1989. More than 13 percent (500,000 acres in nine counties) of New York farmland has been infested by ASB.

ASB can destroy entire fields of the valuable dairy and livestock crop in one growing season. ASB-related crop damage can be as much as $1,100-$1,500 per acre for the complete loss of second- or third-year crops left untreated.

The Cornell Cooperative Extension associations of northern New York are educating alfalfa growers across the region about the use of two species of native insect-attacking nematodes as biological control agents and how to rear these native nematodes for release in their own fields.

In Franklin County, Cornell Cooperative Extension agricultural outreach educator Harry Fefee says: "We have alfalfa snout beetle in Franklin County, perhaps more than people realize. The farmers who have already tried the nematodes here and in Clinton County prefer to treat an entire field and say you can really see the difference in the quality of the crop."

Future Farmers of America students and farm youth were engaged in the early on-farm testing of the nematode rearing and application protocol. Farmers have easily adapted equipment to apply the biocontrol nematodes. In St. Lawrence County, Cornell Cooperative Extension agriculture team leader Brent Buchanan says: "We see the potential of rearing nematodes for sale by our 4-H students and local horticultural businesses. There is already interest here by a custom applicator/seed dealer in the commercial production of nematodes."

A joint project with the Cornell Alfalfa Breeding Team under the guidance of Donald R. Viands, professor of plant breeding and genetics, and Julie L. Hansen, senior research associate with the Shields' Lab is selectively breeding ASB-resistant alfalfa varieties to work in tandem with the biocontrol nematodes to battle the beetle. At least one Cornell-bred ASB-resistant alfalfa variety is in the early stages of commercial seed production.

Research on the persistence of the nematodes over a several year crop rotation is continuing with support from the New York Farm Viability Institute and Cornell's New York State Agricultural Experiment Station.