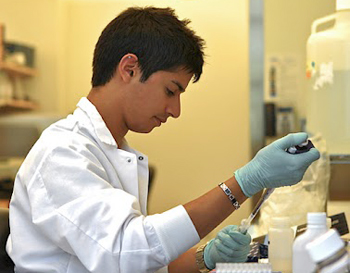 Rudy Nazitto '13, a human biology, health and society major in the College of Human Ecology, has been awarded an oncology research fellowship at the Spanish National Cancer Research Center (CNIO). Funded by Spain's Ministry of Health, CNIO was formed in 1998 in Madrid as that nation's first cancer research institute.

Nazitto is a Hunter R. Rawlings III Presidential Research Scholar studying the ill effects of glucocorticoids -- environmental pollutants found in pharmacological waste -- under Anthony Hay, associate professor of microbiology. Nazitto is one of 12 undergraduates to earn a position in the CNIO's summer laboratory training program.

He will assist the flow cytometry research group in CNIO's biotechnology program June 18-Aug. 10. Nazitto said he is attracted to flow cytometry -- a laser-based form of cell analysis -- because of its ubiquity in scientific labs studying disease. "You can measure cell viability, cell death, release of cellular signals and changes to the cell itself," he said.

Nazitto will work 40 hours per week in the lab and attend seminars on special topics given by CNIO researchers and faculty members. At the end of the program, he and other undergraduates will present the results of their summer projects.

During the past two summers, Nazitto has interned with Amgen, a biotechnology and pharmaceutical firm, studying inflammation and immunology. He is eager to compare his experience in the private sector with work in an international, publicly funded lab, he said.

"What I really liked about CNIO was that it was an oncology research institution funded by the public and government," he added. "I thought it would benefit me to have background in different cultures, both institutionally and geographically."