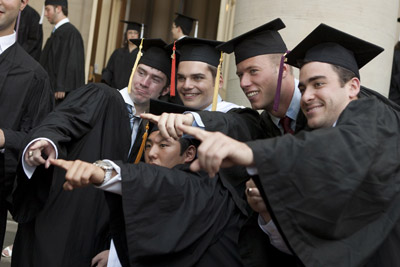 Lindsay France/University Photography
The color of the tassels on these Class of 2011 graduates indicates their college affiliation. 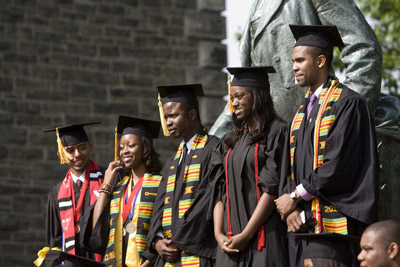 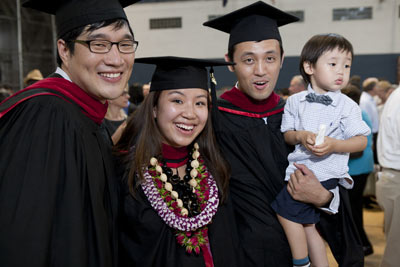 Dating to the university's first graduating class of eight students in 1869, Cornellians, like most Western-trained academics, have sported tradition-rich togs to pick up their diplomas.

It flies against the provisions of subfusc (drab academic formality), yet flip-flops, T-shirts and shorts sometimes lurk beneath the somber black gowns worn at Commencement. Schoellkopf Stadium, after all, can be baking hot. But graduates and faculty members continue to pay homage to tradition by donning robes derived from the cassocks medieval European clerics wore to teach at Oxford, Heidelberg or the Sorbonne.

From tassels to tams, academic regalia indicate status and tell the story of the wearer's field of study, honors acquired or cultural affiliation. And Commencement is one of the few occasions when one can reasonably break out his or her mortarboard or bonnet; hood or tassel; gowns of gabardine and velvet decorated with chevrons; stoles or aiguillettes.

From the colonial era through the outbreak of the Civil War, American students wore academic gowns to class. (Gowns are still worn at Sewanee, The University of the South, in Tennessee). In 1932 and 1959 a committee appointed by the American Council on Education codified the academic dress code followed by most schools. The Ivies follow most of the rules, although Cornell Ph.D. gowns are red instead of the traditional black.

Hoods are accorded those earning graduate degrees, and their color represents the degree. Even the sleeves of academic garb convey meaning. Doctoral gowns have bell sleeves with velvet chevrons; master's have oblong sleeves with wrist openings; and bachelor's gowns have open sleeves. Visit the Commencement website for an illustrated guide.

Members of the faculty don the academic regalia of the institutions from which they graduated. And when you factor in those schools around the world, each with its own color schemes and traditions, you can envision the colorful plumage lining the Arts Quad as graduates march to Schoellkopf Stadium.