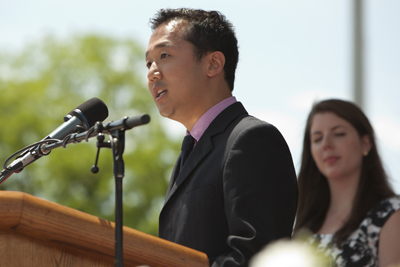 Peggy Ramin '12 remembers making frequent trips to Cornell as a kid for hockey and football games and class reunions. Her parents, brother, cousin and paternal grandparents (including the late Richard "Dick" Ramin '51, a Cornell administrator for 41 years and the namesake of Bartels Hall's Richard M. Ramin Multipurpose Room and the Ramin Family Administration Center) were all alumni and ardent sports fans.

"I remember running around Schoellkopf with my cousins and sitting on top of Libe Slope overlooking Cayuga Lake with my brother," she said. "I actually spent quite a few birthdays in Ithaca because my birthday, June 7, usually falls over Reunion Weekend."

These formative memories and family ties to Cornell prompted her to sign on as co-vice president of participation in this year's senior class campaign. But she would have participated anyway.

"My time here has made Cornell mine. Whether you are the first in your family to go to college or one in a long line of Cornellians, it doesn't matter. One consistency is that this school has something to offer everyone. We wanted seniors to contribute to the campaign in recognition of how special it is that every student can make their time at Cornell theirs -- 'any person, any study,'" she said.

As of May 24, the Class of 2012's senior class campaign had raised more than $41,000 from more than 950 seniors. That included 52 gifts of $250 or more, making it the third year in a row with more than 50 Ivy Society donors. In addition, hundreds of students contributed their time and talent. For example, seniors delivered thank-you letters to Cornell faculty and staff, helped mentor underclassmen, and compiled a book of reflections on their Cornell experience.

Inspired by the class' spirit, President David Skorton has allocated $100,000 of university funds to endow a Class of 2012 scholarship for future Cornellians.

The campaign's goal was to engage seniors as alumni while they were still on campus, said Olivia Moore, campaign co-president. "Once we graduate, we become part of an amazing network of alumni who support our university, and it's important to educate students about their future role."

The campaign also sought to expose seniors to the concept of philanthropy, whether such gifts are to Cornell or a nonprofit, and how seniors' donations help future Cornellians, added John Rhee '12, campaign co-president.

One of the most challenging aspects was "the ask," Rhee said, especially knowing that some seniors may not have jobs waiting for them after graduation. And with student loans looming, it was sometimes hard for seniors to understand the importance of giving back to one's university, Moore added.

That's why the campaign counted volunteering as participation, rather than set a monetary goal. Furthermore, Skorton allocated funds to the class scholarship for every senior who participated in the campaign, so even a $5 donation went a long way. "Someone who could not necessarily give a large dollar amount could still contribute in a meaningful way," Rhee said.

Thanks to the Class of 2012's efforts, the scholarship will support Cornellians for years to come, and a strong base of committed alumni has been formed, Ramin said. "I hope that when we look back on our years at Cornell five, 10, 20 or 50 years from now," she said, "we will remember what Cornell gave us and how important it is that future Cornellians are afforded the same wonderful opportunities."