Craig Cramer
Students in Creating the Urban Eden: Woody Plant Selection, Design and Landscape Establishment have completed a total makeover of the courtyard at the ILR School with new gardens.

The Cornell campus is hosting plants not usually found in cold climates -- including bananas -- thanks to a student horticultural project in the ILR courtyard. 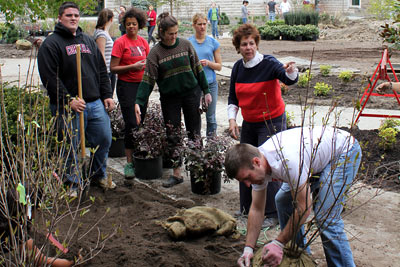 Since 2001, students in Creating the Urban Eden: Woody Plant Selection, Design and Landscape Establishment have designed and installed gardens on campus each spring. This year, they completed a total makeover of the courtyard at the ILR School.

"It's by far the biggest project we've ever taken on," said Nina Bassuk, professor of horticulture and director of the Urban Horticulture Institute in the Department of Horticulture, who co-teaches the course with Peter Trowbridge, professor of landscape architecture. This year's class also revamped the landscaping outside the Computing and Communications Center on the Ag Quad.

For the ILR courtyard, the students had to cope with a demanding site that included compacted soils and buildings on all sides.

"It's an extreme microclimate, particularly with the heat reflecting off the wall on the north side of the courtyard," Bassuk noted. "But these conditions are typical of what the students will face when they design landscapes for urban settings."

The courtyard's warmer microclimate allowed the students to use plants that wouldn't normally survive winters elsewhere on campus, such as bamboo, juniper, cherry laurel and Himalayan pine. That will allow Bassuk and Trowbridge to teach about landscape plants usually only found in warmer climes. The planting even includes a hardy banana (Musa basjoo).

Most sites on campus zone 5b on the U.S. Department of Agriculture Plant Hardiness Zone Map, Bassuk said. "The courtyard is at least zone 6b and possibly 7a -- conditions more commonly found on Long Island or in New Jersey, southeastern Pennsylvania and Maryland."

Bassuk and Trowbridge kick off the annual design and installation process in summer, when they meet with the Grounds Department to identify locations that need a makeover. During fall semester, Urban Eden students learn site assessment theory in class, but then apply it to the site where they'll be working. They test drainage, pH and other soil properties, observe how much sun different parts of the site receive and create a site map.

"Then each student creates a design plan for the site and presents their plan to the class," Bassuk said. "The class votes on which plan they think will work, and the elements of the best plans are folded into one unified design."

After checking with the Grounds Department and other stakeholders, students begin preparing the site for planting as soon as the weather breaks in spring.

"It took some serious soil preparation and organic matter amendments to relieve compaction problems on the ILR site," Bassuk said. That included incorporating hundreds of yards of compost and spreading 175 yards of topsoil. Students also used coarse sand to create a beach-like environment for some plants that require especially well-drained soil and imported acidic soil so they could plant acid-loving plants along the south and west walls.

After planting nearly 900 trees, shrubs and groundcovers, students tucked them in with 40 yards of mulch and rolled out 6,500 square feet of sod under the tutelage of Frank Rossi, associate professor of horticulture and a turf specialist.

"We've always thought that it's not enough to just learn about landscape plants in the classroom," Bassuk said. "Our students have to learn how to do things. When they're out there in management positions and creating designs, they have to know what it takes -- and how it feels -- to turn their plans into reality."

Craig Cramer is a communications specialist in the Department of Horticulture.