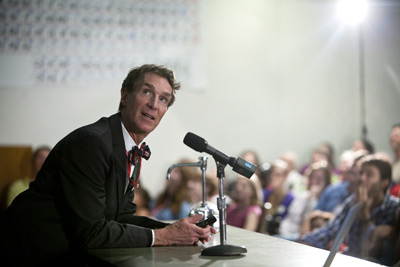 Speaking to a packed alumni audience in Baker Lab June 9 during Reunion Weekend, Bill Nye '77, wearing his characteristic bow tie, spoke of his lifelong interest in science, his work developing sundials for the Mars rovers, the solar clock he designed for Rhodes Hall and his current work at The Planetary Society.

Best known as the host of "Bill Nye the Science Guy," the popular children's show from the '90s, Nye said that the roots of his lifelong interest in science, space and timekeeping stemmed from the fact that his mother was recruited to work on breaking the Enigma Code during World War II, and that his father spent several years as a Japanese prisoner, where he became an amateur astronomer and sundial enthusiast.

According to Nye, the Marsdials are important for tracking time on Mars and for calibrating the colors of the images that come from Mars.

Nye explained that the edges of shadows reflect the color of the sky.

"The next time you're outside on a sunny day ... go outside and make a shadow on something white" and a tinge of blue will appear on the edge of the shadow, Nye said.

In contrast, shadows have a tinge of orange on Mars, reflecting the different color and atmosphere of the Martian sky.

Nye's interest in sundials extended to Cornell with his 2011 gift of a solar clock for the top of Rhodes Hall. The clock, designed by Nye, has a unique solar feature in which sunlight is funneled into the clock throughout the day and lights up a small disc at the top of the clock face at exactly solar noon, which is when the sun is at the highest point in the sky.

As CEO of The Planetary Society, a nonprofit focused on exploring the solar system and the search for extraterrestrial life, Nye works on such projects as sending life to Mars and developing methods to deflect asteroids passing close to Earth.

"Deflecting an asteroid is like science fiction. Only, it would be real!" Nye said.

The earth's atmosphere is so thin that, "if we had the right car and some extraordinary road, we could drive straight up and be in outer space in less than two hours ... this is what I like to call 'being aware of your place in space,'" he said.

Earth's atmosphere, however, is "just right" for sustaining life, he said.

However, Nye pointed out that the composition of the Earth's atmosphere is slowly changing. He encouraged Cornellians to embrace their "legacy of exploration" and work on tackling climate change and other problems facing the world today.

"We are all part of this optimistic view that we can change the world, and we can leave it better than we found it," Nye said. "To the young people here, to the students in school now, I very much want you to ... dare I say it ... change the world."

Graduate student Joyanna Gilmour is a writer intern for the Cornell Chronicle.