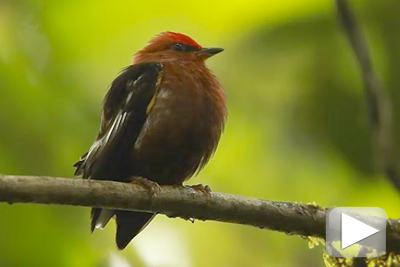 Males of all species have been known to go to extremes to woo a female, but few have gone so far as the male club-winged manakin, a sparrow-sized bird from the forests of Ecuador and Colombia.

Cornell researchers first reported in 2005 on the ability of these birds to rub specialized wing feathers together to produce a high hum. Now they report in the June 13 edition of the Royal Society journal Biology Letters that these are the first flying birds known to have solid wing-bones. This is what allows these birds to produce their courtship sounds.

In the male club-winged manakin, the ulna (analogous to a human bone in the forearm) is ridged, solid instead of hollow and 3.5 times the volume of other similar-sized birds' ulnae, including other manakin species. Special sound-producing feathers attached to the ulna resonate to make the courtship tones. The researchers also found similar but lesser adaptations to the humerus, which is the same as the bone between elbow and shoulder in humans.

The researchers believe the large, dense bones are adapted for courtship and come at a cost to efficient flight where lighter, hollow bones are ideal. The adaptations offer an extreme example of a species modifying a body part to attract a mate, but with a presumed cost to its fitness.

"The idea that there's this conflict between sexual selection and natural selection is not new," said Kim Bostwick, curator of the Cornell Museum of Vertebrates and lead author of the study. For example, a male peacock's large, showy feathers also inhibit flight but work well to attract females. But with the club-winged manakin, the adaptation "isn't just the feathers and what they look like. This is a functional change at the deepest levels. Ultimately, it's the female that's responsible for this odd bone inside the wing of the male," Bostwick added.

The researchers used microcomputer tomography (CT) scanners to noninvasively obtain complete density data of the inside of the bird bones, which could then be reconstructed into 3-D color images.

In 2003, Bostwick had the only club-winged manakin specimens in the world, but too few to dissect down to the bones, though she suspected the bones were novel. Julian Humphreys, a co-author on the paper and a researcher with a National Science Foundation digital library at the University of Texas at Austin, suggested that Bostwick try the manakin specimens in their CT scanner.

"He sent me back this image and said, 'Oh my gosh, can you believe what you are seeing?'" Bostwick said. "That's when we realized we had an amazing and totally unique structure."

For this study, Bostwick and co-author Mark Riccio, Cornell Multiscale CT Facility director, imaged, analyzed and compared a club-winged manakin's bones with the wing bones of seven other manakin species. The Cornell machine allowed them to image all the different birds' bones at once, so the readings for each bone were equally calibrated for comparisons and quantification. Since a few other manakins also make wing sounds, Bostwick wanted to see if the evolutionary origins of the club-winged manakins' adaptation were evident in the other birds.

"The big picture is the club-winged manakin is out on its own with a totally different wing," Bostwick said. "Some of these species do show some of the patterns but they're in a different end of the continuum."