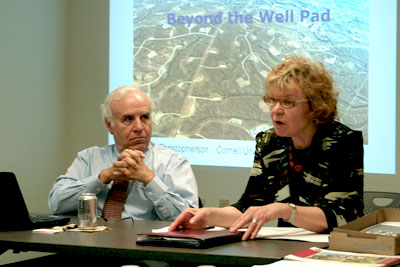 Molly Nevola
Professors Anthony Ingraffea and Susan Christopherson briefed journalists on the risks of hydraulic fracturing June 25; later that day, they met with committees and congressional delegations on Capitol Hill to do the same.

Studies by Cornell experts on the unconventional gas exploration technique known as hydraulic fracturing or "fracking" reveal that the drilling process has economic and environmental repercussions, eliciting widespread concern about the impact on quality of life, according to two professors speaking to the media June 25 at the Cornell University Wolpe Center in Washington, D.C.

Professors Anthony Ingraffea and Susan Christopherson cited science and statistics while sharing their expertise on the controversial topic with a room full of journalists. The discussion took place hours prior to a special briefing on Capitol Hill, where the professors met with committees and congressional delegations to discuss their findings.

"What we're really talking about is intensive development that creates an extensive industrial landscape with implications not only for those who live near the well sites but also for those in the surrounding region," said Christopherson, professor of city and regional planning and an expert on regional economic development.

Ingraffea, who has studied fracking since 1982 and co-authored a controversial study warning that producing and burning natural gas could do more to aggravate global warming than coal, has found that some leaking methane is inevitable due to failures in casing or cement, contaminating underground sources of drinking water and damaging air quality. In fact, statistics show that even new wells fail and that a higher percentage fail with age.

"It's an engineering process that is too hard to do perfectly," said Ingraffea, a professor in Cornell's School of Civil and Environmental Engineering, "even with the best personnel, cements and equipment."

Another effect of this leaking is worsening of climate change. Methane, a greenhouse gas, 105 times more potent than carbon dioxide over a 20-year period. In the end, shale gas is likely to have a greater greenhouse effect than conventional gas or other fossil fuels, he said.

Christopherson studied communities in Pennsylvania and New York counties where hydraulic fracturing is occurring. The results suggest that, over time, hydraulic fracturing will contribute to the loss of population and income inequality and crowd out other industries, she said.

Rural New York and Pennsylvania counties with conventional natural gas drilling had less diverse economies, job loss outside of the extraction sector and population decline by comparison with adjacent counties, she found.

If you believe in the science, Ingraffea noted, the solution should involve doing something to reduce the unconventional development of shale gas and decrease the leakage of methane.

"Why would the industry take the position it does? They have to promote all the good things that can come from expanded shale gas development," he said. "But they must be knowledgeable enough to know we need to begin to shut it down to curb its consequences."

Ingraffea and Christopherson are faculty fellows with Cornell's David R. Atkinson Center for a Sustainable Future, which sponsored the Congressional briefing.

Molly Nevola is a freelance writer in Washington, D.C.