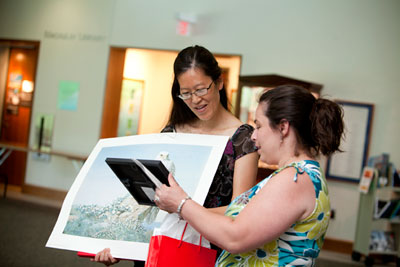 Since coming to Cornell in 2001, Miyoko Chu, senior director of communications at the Cornell Lab of Ornithology, has completed major communications projects that have helped the lab garner numerous awards. But it is her ability to work with people -- her staff, peer directors, faculty and the public -- that received highest praise when she was presented with the George Peter Award for Dedicated Service June 21 at the lab's Johnson Visitor Center.

"For me, it's not just about the things she does -- it is the way she does them," said Patricia Leonard, the communications specialist who spearheaded Chu's nomination. "Everyone is heard, all ideas are welcomed. Nobody feels stupid for asking a question," she said at the reception.

Leonard picked four adjectives from the nomination letters that she thought summed up Chu's strengths: creative, tactful, visionary and "my personal favorite: unflappable."

John Fitzpatrick, the Louis Agassiz Fuertes Director of the Lab of Ornithology, said that Chu's major achievements include her Ph.D. in integrative biology from the University of California-Berkeley; her postdoctoral position at the Smithsonian Institution; her work on the lab's quarterly newsletter, Birdscope; her books "Songbird Journeys" and "Birdscapes"; the revamping of the lab's annual report in 2009; her revisions of the AllAboutBirds.org website, for which she and her team won a "Webby Award"; and her recent collaboration with Northeastern University to create a Web-based ID tool for birds.

In his nominating letter, Fitzpatrick noted "Miyoko's extraordinary effectiveness as a team builder and leader," writing that she is "one of the most dedicated and patiently effective employees, colleagues and leaders with whom I have ever had the pleasure to work."

"She exudes excellence and integrity," wrote Janis Dickinson, associate professor of natural resources and the Arthur A. Allen Director of Citizen Science. "The ways in which she confronts issues give her an authenticity that is both powerful and respectful, bringing people on board with her programmatic vision, while also encouraging them to be active, creative players in the design of the program's activities," she added.

The most prestigious peer-nominated staff award at Cornell, the George Peter award is given by the Employee Assembly (EA) to staff members who "consistently demonstrate a high degree of excellence in doing their jobs and who extend themselves to help others and go above and beyond the normal expectations of their job responsibilities," said Tanya Grove, EA chair.

In addition to about 50 Lab of Ornithology staff members, Chu's husband, Mark Chao, and daughter Francesca were present at the reception (her son Tilden was unable to attend).