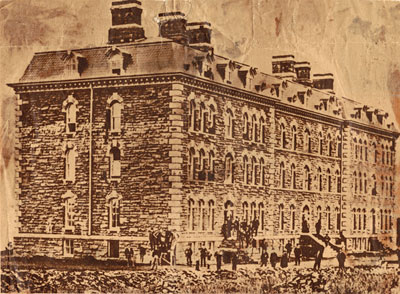 Division of Rare and Manuscript Collections
As New York state's land-grant university, Cornell honored the men who authored and passed the Land Grant Act into law - Justin Morrill (representative from Vermont and later a senator) and President Abraham Lincoln - by naming two of its earliest buildings after them. Morrill Hall, erected in 1866 as Building Number One and later known as South University Building, was named for Morrill in 1883.

Cornell University's sesquicentennial is three years away, but let the festivities begin: This July marks the 150th anniversary of the Morrill Land Grant Act that some have called the greatest piece of legislation to come out of the United States Congress.

The Morrill Land Grant Act expanded higher education opportunities for a young nation driven by westward expansion, the advancement of the industrial era, and the aspirations of its citizens in the mid-1800s. Until this watershed legislation, higher education was mostly the domain of the privileged -- curricula focused on the classics in mostly sectarian institutions.

The Morrill Act's purpose was to provide for "at least one college in each state where the leading object shall be, without excluding other scientific or classical studies, to teach such branches of learning as are related to agriculture and the mechanic arts ... in order to promote the liberal and practical education of the industrial classes."

"The Morrill Act is the basis for one of Cornell's most enduring qualities as a land-grant institution -- a deep commitment to developing knowledge that benefits communities around the world," President David Skorton said. At Cornell's 2012 Commencement, he mentioned the coming anniversary, calling the act "a hopeful, optimistic piece of legislation, premised on the belief that through the education of people from all backgrounds in an expanded range of fields -- from agriculture and the mechanic arts to liberal studies -- we could become a better, more prosperous nation in a changing world." 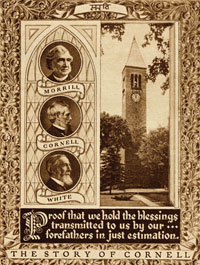 Division of Rare and Manuscript Collections
In 1935, a special bookplate, "The Story of Cornell," was created by Henry P. de Forest, Class of 1884. de Forest designed the bookplate, which prominently featured Justin Morrill as well as Ezra Cornell and Andrew D. White; the year before, de Forest also had created a "Morrill Memorial Medal" in honor of Morrill and featuring U.S. President Abraham Lincoln (who signed the Morrill Act into law) that he presented to his classmates who returned to Cornell for their 50th reunion.

The legislation set the stage for Cornell to be founded as New York's land-grant college; the act secured the initial finances of the young university and positioned it to become one of the world's leading educational institutions. The university's unique Land Grant Act story involves a perfect storm that includes Ezra Cornell's altruism, the nation's largest state, the lack of federal lands in that state and what some consider the greatest land speculation deal in U.S. history.

The bill provided a grant of federal land to each state (proportional to its population with New York being the largest), which could be sold or developed, with the proceeds used to build and operate that state's land-grant college, where agriculture and the mechanical arts (engineering) would be taught. Nearly 80 percent of the nation's gross national product came from agriculture and manufacturing, yet little attention was given to teaching and research in these fields. Progressive education reformers advocated for curricula that would prepare the nation's workers to take advantage of modern approaches and for government to make higher education available to all citizens.

In 1861, Vermont Rep. Justin Smith Morrill submitted an amended version of the land-grant bill that called for institutions to teach military tactics as well as engineering and agriculture. Aided by the secession of numerous states that did not support the plan, the bill was signed into law by President Abraham Lincoln on July 2, 1862.

In 1865, Cornell was founded as New York's land-grant institution; Ezra Cornell, then a state senator, offered $500,000 as an endowment and the gift of his Ithaca farm to create the eponymous university. The new university immediately found itself with significant financial burdens from building construction and faculty recruitment.

The land grant would provide New York state with 990,000 acres of land. But with no federal land available within its borders, New York was given paper scrip to acquire land in other states. The flood of suddenly purchasable land created by the Land Grant Act depressed the price of the scrip. Ezra Cornell offered to purchase most of New York's scrip and hold and manage the land until its true value could be realized.

Ezra Cornell magnanimously offered to return all net proceeds from his land investment to the new university, and secured agreement from the university and the state to place these funds in a newly established Cornell University endowment fund.

While most other states simply sold the land or scrip for the immediate cash, Ezra Cornell's pragmatic vision ultimately resulted in a substantial endowment for Cornell that secured its place among the nation's elite institutions.

Division of Rare and Manuscript Collections
A view of the Cornell University campus in the 1880s.

Ezra Cornell sought investment advice from fellow Ithacans, university board members, and lumbermen Henry Sage and John McGraw. He quickly set his sights on the northern pinelands of Wisconsin -- the richest tract of pine forest west of the Allegheny Mountains. He surveyed some initial acreage and ultimately purchased 500,000 acres of this valuable land. Crucially, he convinced the university's board to not sell the land right away. He correctly predicted that once the abundance of newly offered land-grant acreage diminished, and as the country's westward expansion increased demand for construction materials, the pine forests and the land would dramatically appreciate.

Ezra Cornell died in 1874, but Sage took the baton protecting the founder's intentions. It was an excruciating wait for the cash-needy university -- but well worth it.

While many states sold off their land grant allocations quickly for as little as 30 cents per acre, Cornell's investment and Sage's decadal management provided revenues averaging $9.69 per acre (with a high of $82 per acre). Exceeding all aspirations, $5,051,000 was returned to the university's endowment once the last parcels were divested in the 1920s. Without this significant endowment in its earliest years, Cornell may not have become one of the world's premier research universities.

While the land-grant mission of service was initially focused on outreach to the respective states, today this land-grant ideal extends to the contributions of Cornell to communities around the world.

Cornell's commitment to educating a broad, diverse population drives its admissions. While teaching and research in agriculture and engineering continue, service learning and community engagement permeate all corners of the campus and beyond, as students and faculty use knowledge, effort and creativity to improve the lives of others.

Cornellians, celebrate the 150th of the Morrill Land Grant Act of 1862 and Ezra Cornell's acumen. Read retired budget director Michael Whalen's treatise (dpb.cornell.edu/documents/1000046.pdf) on Cornell and the Land Grant Act. And peruse my blog (http://cornellpines.blogspot.com/2010/06/evening-at-turks.html) about my trek in northern Wisconsin to another small town called Cornell.

Daniel Mansoor '79, MBA '80, a Wisconsin native, has traveled to Cornell, Wis., to discover "the rest of the story." He'll be in those northern woods in 2013 to help the community of 1,644 celebrate that city's centennial.