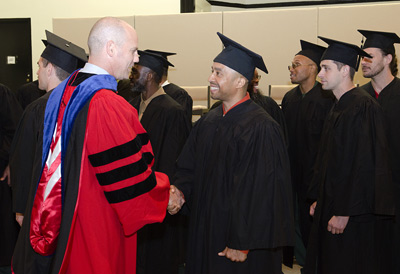 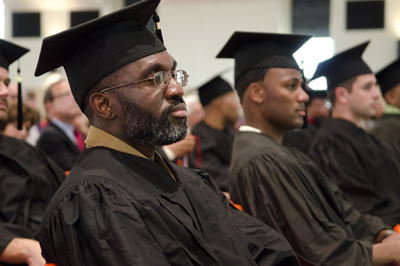 Auburn, N.Y. -- Saifuddin Abdus-Samad stayed up until 3 a.m. the night before he graduated with an associate's degree through the Cornell Prison Education Program (CPEP), studying for an exam in his contract law class. He didn't need the class to graduate. He just wanted to do well on the exam.

Abdus-Samad is one of 15 prisoners in Auburn Correctional Facility, a maximum-security prison, who earned an associate's degree June 5.

"Just because we're in prison, they're not just handing out degrees here. I worked hard for this -- plenty of sleepless nights, studying for tests," Abdus-Samad said, adding that he was most engaged in classes on social issues and public policy. "We don't just sit in here and lift weights and remain idle."

With pomp and circumstance, a bagpiper playing "Far Above Cayuga's Waters" led the graduates, wearing black robes and mortarboards, through the prison's auditorium followed by visiting dignitaries.

"As the land-grant university of New York state, Cornell has a mission of public engagement -- a mission to use the wide variety of skills and knowledge within the university to serve the needs of people around New York state and beyond. It was clear that the prison education efforts were one way to fulfill that mission," said Seeber, referring to Cornell's decision in 1999 to sponsor credits and transcripts for Auburn students working with Cornell faculty.

Given some of the graduates' lengthy sentences, it may be some time before they use their degrees outside prison. But education offers them the priceless possibility of expanding their inner horizons, said graduate Derek Slade, whose favorite classes were in theater and political science. "One thing about prison that I've learned is to get the silver lining out of it. I reflected on things I've done -- the good, the bad, the ugly. ... The college program ... allowed me to reconnect with the wiser, the smarter, the better sides of myself."

Formally established in 2008, CPEP, led by Faculty Director Robert Turgeon, Cornell professor of plant biology, and Executive Director Jim Schechter, offers up to 17 classes per term to 100 men at Auburn and Cayuga Correctional Facility. The classes range from genetics and poetry to economics and medical anthropology. A dozen Cornell faculty members and graduate students teach the classes, aided by 40-50 undergraduate tutors and teaching assistants; all but the graduate students, who receive a small stipend, teach voluntarily.

The prisoners must pass an entrance exam to be admitted. They earn Cornell credits that are transferred to CCC, which awards the associate degree. Cornell waives tuition and fees, while CPEP pays for books, school supplies and the program's administration.

After the ceremony, the audience shared a meal with the graduates. Family members included Abdus-Samad's sister, Tysha Grays '94, who traveled from North Carolina to attend.

"I feel that he's achieving something that he's always been able to achieve," Grays said, referring to Abdus-Samad. "It's just that there are some social factors that come into play that can inhibit some young men's ability to move forward. I'm just happy for him."