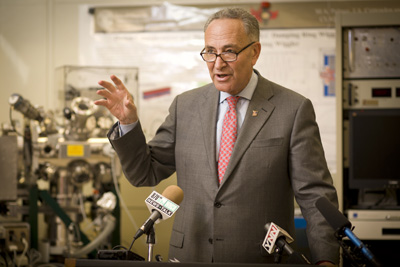 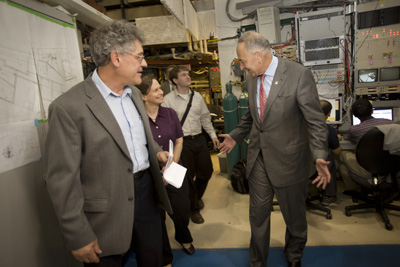 Jason Koski/University Photography
Sol Gruner, director of Cornell High Energy Synchrotron Source, and Ritchie Patterson, director of Cornell Laboratory for Accelerator-Based Sciences and Education, lead Schumer, right, on a tour of the CHESS facility, along with members of the media.

The Cornell High Energy Synchrotron Source (CHESS), one of five national hard X-ray facilities for synchrotron X-ray research, had been under threat of closure due to possible cuts from the National Science Foundation, its primary funder.

Though CHESS officials say peer reviews had consistently endorsed the facility's science and training programs, the NSF had questioned if it should continue to support a synchrotron light source, or if it should leave this task to the Department of Energy, which runs other facilities.

Schumer, introduced by President David Skorton, put those fears to rest when he visited Wilson Laboratory, home of CHESS, to announce his advocacy on behalf of CHESS. Schumer said he had received commitments from the White House's Office of Management and Budget and Office of Science and Technology Policy, as well as NSF officials, to allow CHESS to plan a long-term future for the facility, in view of its unique, university-based role.

New York's senior senator, whom Skorton called a "very, very good, consistent friend to higher education," heartily praised Cornell for being not only a world-class research institution, but also for its commitment and service to the state of New York.

CHESS's employees as well as the thousands of scientists from around the world -- including Nobel laureates -- who use the X-ray facility for research have large ripple effects in the economy in Tompkins County and beyond, Schumer said.

"CHESS serves as a unique training ground for a scientific workforce needed to keep the U.S. competitive," Schumer said. "Most people have never heard of it, but it's part of the lifeblood of our scientific community."

Patterson listed many scientific contributions from CHESS, including: development of new lifesaving drugs and novel materials for fuel cells; characterization of new polymers, ceramics and composites; studying materials at center-of-the-Earth pressures; and even using the powerful X-ray source to reveal features hidden underneath famous, priceless paintings. She also noted that CHESS and the accelerator complex have developed new technologies in X-ray and accelerator science. With fierce international competition for technical supremacy, Cornell is a leader in such key areas as superconducting acceleration and X-ray detectors, Patterson said.

Schumer, who also toured the CHESS facility during his visit, was welcomed to campus by Skorton, Patterson, CHESS director Sol Gruner, as well as Provost Kent Fuchs, Vice Provost for Research Robert Buhrman, and many CHESS scientists.

CLASSE's primary source of funding is the Division of Materials Research at NSF, which provides Cornell roughly $28 million per year to operate CHESS and do accelerator research. Other funding sources for the facility include the NSF's Division of Physics, as well as the National Institutes of Health.