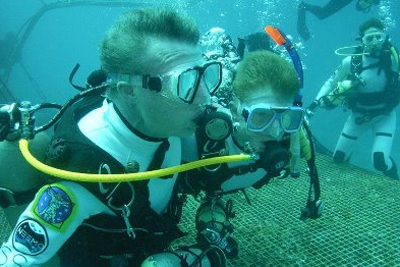 NASA
Steve Squyres, foreground, on a familiarization dive around the Aquarius habitat. With him are fellow aquanauts Tim Peake and Dottie Metcalf-Lindenburger.

Mars scientist Steve Squyres is again learning to walk in space by diving into the sea as a NASA aquanaut.

Squyres, Goldwin Smith Professor of Astronomy and lead scientist for the NASA Rover mission to Mars, is one of four NASA scientists making up the crew of the 16th NASA Extreme Environment Mission Operations (aptly shortened NEEMO), a two-week undersea training mission located in the Florida Keys National Marine Sanctuary in Key Largo.

Starting June 11, NEEMO aquanauts will spend close to two weeks living at the Aquarius Undersea Laboratory Base, at a depth of 63 feet, with the goal of testing techniques and protocols for human exploration of near-Earth asteroids.

The last NEEMO mission began in October 2011 -- Squyres' first aquanautic adventure -- but was cut short due to the approach of Hurricane Rina. The second splashdown will continue efforts that began during NEEMO 15, but with some added objectives, Squyres said. The mission will focus on three areas: communication delays, restraint and translation techniques, and optimum crew size, according to NASA.

The crew has substantially changed many of the exploration tools and procedures based on lessons learned from NEEMO 15, Squyres said, which will be tested on the upcoming mission. Also, they will work in tandem with one-person submarines that simulate small free-flying spacecraft at an asteroid -- one of the things NEEMO 15 didn't get to.

They'll do the entire mission with a 50-second communication delay between Aquarius and the outside world to simulate the delays that crews would experience on a real asteroid mission, Squyres said.

NASA has planned a 2025 mission to an asteroid two-thirds of a mile in size. That mission will be in a microgravity environment, Squyres said. And the best way to simulate microgravity is under water, he said.

Squyres also serves as chairman of the NASA Advisory Council.