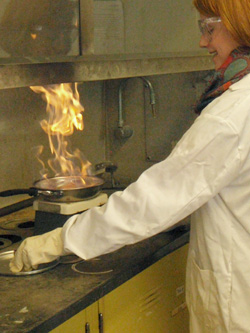 Provided
Christine Hansen '12, who starts graduate school in the area of food science at Cornell this fall, conducted a two-year research project that suggests that flambé does not enhance flavor.

The cooking technique in which a dish with alcohol is set alight at the table may be dramatic, but does it enhance the flavor? It doesn't seem so, according to an undergraduate research project at Cornell.

Viticulture and enology student Christine Hansen '12, who starts graduate school in the area of food science at Cornell this fall, set out to discover what actually happens to food when a spirit is added and ignited, as part of a two-year research project she started in her sophomore year.

Inspired by a lecture about measuring ethanol in wine and spirits by Gavin Sacks, assistant professor of food science, Hansen first prepared a caramel sauce, similar to that used in bananas Foster, using flambé. As a control, she also prepared a sauce that was heated but not ignited, and a third sauce that was neither heated nor ignited. The sauces were then subjected to chemical and sensory analysis.

"Surprisingly, the ethanol content of samples that were ignited -- as in flambé -- were nearly identical to those that have just been heated," said Hansen. "While there are small differences in the final ethanol concentration, almost all of the ethanol and water loss can be explained by evaporation and not the actual ignition."

Hansen also investigated the claim of some cookbooks that browning reactions -- important to the flavor of grilled meat and roasted coffee -- may occur during flambé. Using temperature probes, she determined that although the temperature of the flame in flambé can reach more than 1,300 degrees Fahrenheit, the temperature of the food surface never exceeds the boiling point of water, which is too cool for browning reactions to occur. She found no chemical evidence of browning.

"Christine's research suggests that the major contribution of flambé is to look spectacular," said Sacks. "The other changes that occur, like the removal of ethanol, can be assigned to heating alone.

"If the show is unnecessary, for example if flambé is being performed in the kitchen rather than tableside, there may be safer ways to remove ethanol from the spirit during cooking," he added.

Hansen's research culminated in a senior thesis and presentation at the American Chemical Society in San Diego March 25-29 as part of the Ag and Food Division's Undergraduate Symposium.

Andrea Elmore is undergraduate coordinator in the Department of Food Science.