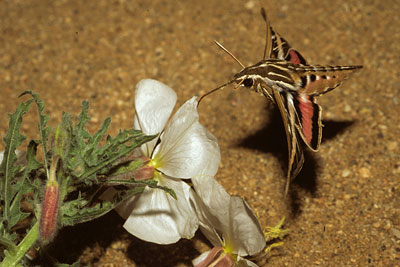 Robert A. Raguso, Cornell University
A white-lined sphinx moth visits an evening primrose flower. At this distance (one tongue length) from the flower, the moth can detect and evaluate a transient relative humidity gradient produced when these flowers contain nectar, without having to land and probe them.

People assume that a flower's scent, color and shape attract insects to settle on a flower to sip nectar and, thereby, pollinate the plant. But new research shows that a more relevant sensory apparatus may help some insects hunt for a flower's sweet juice: hygroreceptors that sense humidity.

A study of hawkmoths that hover and sip nectar from tufted evening primroses has shown for the first time that some pollinators can detect a mere 4 percent rise in humidity, which stems from evaporation of nectar directly above a flower.

"We were intrigued by the question; since flower scent, shape and color don't directly provide information about nectar amount, could there be a more accurate signal?" said Martin von Arx, a postdoctoral entomology fellow at the University of Arizona and the lead author of the paper posted online May 29 in the Proceedings of the National Academy of Sciences. Von Arx was a postdoctoral researcher in the lab of co-author Robert Raguso, Cornell professor of neurobiology and behavior, where the experiments were conducted.

Martin von Arx, Cornell University
Evening primrose flower as seen by the human eye, left, and with a visualization of a humidity gradient in the horizontal plane 10 millimeters above the flower surface, right. White-lined sphinx moths are able to perceive such gradients during nectar foraging. RH in legend refers to relative humidity.

The researchers studied the white-lined sphinx ( Hyles lineata ), the most common species of hawkmoth in the United States, with the tufted evening primrose ( Oenothera cespitosa ), a favorite of the hawkmoth that blooms at night in southwestern deserts.

The researchers first scanned living primroses in sealed containers with sensitive humidity measuring devices and found the humidity was slightly higher just above the open flower, where water vapor rose out of the flower's nectar tube.

Then, they experimented with hawkmoths and artificial flowers to control the flower's color, size, shape and odor, while only varying humidity levels.

"That way we could isolate the cue," said von Arx.

The researchers found that the moths preferred to hover and extend their long proboscises (straw-like feeding tubes) over the fake flowers that had slightly higher humidity levels.

By sensing humidity, the hawkmoths use a reliable measure of nectar levels, unlike scent from the petals (most nectar is odorless) or flower color, which attract pollinators but do not always provide true information on the availability of nectar. This is important since humidity-sensing helps hawkmoths identify the best flowers for food among a field of flowers. Also, hovering costs hawkmoths a lot of energy and makes them vulnerable to such predators as bats. By zeroing in on flowers with the most nectar, the moths increase their payoff while limiting energy and risk.

Many other insects, including mosquitoes and cockroaches, are known to have hygroreceptors on their antennae, though this is the first study to show that pollinators use this sense for foraging.

Co-authors include Joaquín Goyret, a postdoctoral fellow in Raguso's lab, and Goggy Davidowitz, an entomologist at the University of Arizona.