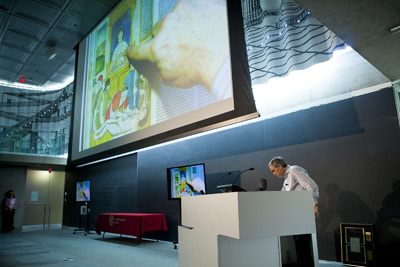 Lindsay France/University Photography
Jay Walker '77 points to an image from the first medical text, part of his private collection chronicling the history of the human imagination.

When the Apollo 16 astronauts went to the moon, they needed a way to drive their lunar vehicle around without getting lost -- tough to do without GPS, which hadn't been invented yet. So they brought along a star chart of the constellations.

The chart, still streaked with moon dust, is one of several rare objects and books Jay Walker '77 showed from his private collection during a June 7 Reunion lecture in Millstein Hall that demonstrated why imagination has been the driving force behind human invention.

"The astronauts are guiding the car on the moon by looking at the constellations invented way back by the Greeks of star patterns of imaginary things and beings in the sky," said Walker, founder of Priceline.com, chair of Walker Digital and curator of the annual TEDMED health and medicine conference. "Humanity's long journey from the swamp to the stars … can be viewed as a journey of the imagination."

Walker's talk kicked off the exhibition "Collecting Imagination: Treasures from the Walker Library of the History of Human Imagination."

Our imagination developed from the need to explain three great mysteries: the natural world, the human body, and life and death, Walker said. That need prompted one of the greatest leaps of imagination, said Walker as he held up a modest 11-page pamphlet: the first publication of Albert Einstein's theory of relativity.

While we admire the imagination today, the Greeks viewed it with suspicion, because it could corrupt reason, Walker said. For 1,500 years, science meant obedience to orthodoxy.

Showing the first illustrated medical text, from 1493, Walker pointed to a hand-colored image in which a professor is lecturing while his students ignore him. The only person with any medical knowledge is a lowly barber, who is dissecting a cadaver. "Why are they paying no attention? Because none of the diagnoses or treatments of the era depended on anatomical knowledge," Walker said. "This was simply a required course."

The Renaissance produced the first steps toward the greatest imaginative leap of the 20th century: the computer. In France, Joseph Marie Jacquard created punched cards that "instructed" a loom to create elaborate designs. Fanning out a facsimile of a Jacquard card, Walker explained that the cards were precursors to IBM punch cards.

By the late 1800s, the imagination began to gain respect, because it gave people the power to reinterpret everything around them. "From Louis Pasteur's germ theory to Darwin's theory of natural selection, human imagination caused a revolution in how we view ourselves and our world," Walker said.

By the early 20th century, imagination superseded reason as the portal to truth. Freud and his colleagues "opened entirely new realms for the human imagination to roam about," Walker said, showing inkblots by Swiss psychologist Hermann Rorschach.

Imagination in the 21st century made links "between psychology and literary theory, comparative anthropology and language, between dream symbolism and logic, between the irrational world of fantasy and the ultra-rational world of modern science," Walker said.

In the future, we may teach children how to cultivate their imaginations, Walker predicted. "There's no Imagination 101, 201 or 301. But there ought to be," he said.

"Collecting Imagination: Treasures from the Walker Library of the History of Human Imagination" is "a blockbuster" exhibit said University Librarian Anne Kenney as she introduced Jay Walker's June 7 talk. "We've never had anything like this before in the library," she said.

The Kroch Library exhibit features such treasures as an original Soviet Sputnik alongside a U.S. Vanguard satellite, a cuneiform cone from 2000 B.C., and a leaf from the Gutenberg Bible. This exhibit marks the first time an extensive selection of objects from the private collection of Walker and his wife, Eileen Walker '76, MBA '78, has been on public view.

Portions of the exhibit will also be displayed in the Herbert F. Johnson Museum of Art, Mann Library and Tompkins County Public Library through Oct. 29. Information: http://rmc.library.cornell.edu/imagination.