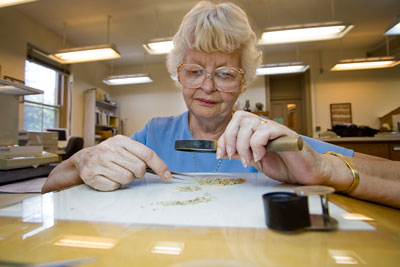 Rob Way
Joyce Wicksall, a purity analyst at the New York State Seed Testing Laboratory, has worked at the Geneva facility for more than half of its 100-year history.

As the New York State Seed Testing Laboratory (NYSSTL) at the New York State Agricultural Experiment Station celebrates its century of service to farmers across the state, Joyce Wicksall has a unique perspective: She's worked at the Geneva, N.Y., facility for more than half of its 100-year history.

She was 17 when she started working as a seed analyst at the Cornell lab in 1954, fresh out of high school. Now 75, Wicksall has retired twice -- her first break lasted just two weeks -- but keeps coming back.

NYSSTL Centennial
The New York State Seed Testing Laboratory will celebrate its centennial with an open house July 13 at Sturtevant Hall from 3 to 4:30 p.m.

"I love it. I love everything about it," she said. "It's my thing. Some people would find it boring or lack the patience to handle it, but I lucked out."

NYSSTL became the official state seed laboratory July 1, 1912. At that time, the big concern was purity. Weeds were making their way into seed batches sold to farmers, competing for nutrients and wreaking havoc in the fields. These days, germination is also a big concern, so the lab conducts tests to determine if seeds will grow.

They may seem simple services, but they are truly valuable to farmers who have invested thousands of dollars in seeds and whose livelihoods rely upon good crop yields. The lab saves growers and the state significant sums by preventing crop losses, said interim lab director Michael Loos.

"We have farmers who depend on us to help them get their seed certified to sell, or who need us to ensure their seeds will germinate," Loos said. "It's so important for the food system to have a lab like this. We're a valuable part of the human food chain."

Wicksall has watched the lab evolve over the past 58 years. She remembers the sole large, loud calculator she used to share with all of her colleagues, now replaced by individual computers. Other new technologies, such as seed blowers and inspection stations, have been an enormous help, especially with noxious weed identification, she said.

But it's still an industry reliant on the skills of its people, and Wicksall has certainly developed an immense knowledge base. The laboratory includes a herbarium with more than 6,000 species to use as a reference, and Wicksall knows most of them.

"She is so knowledgeable. You can hand her a handful of seeds, and she can identify them by sight," Loos said. "It's a real privilege to work with someone like that. She's my colleague and my mentor."

"I love it when something comes in that I don't know," Wicksall said. "It's fun to try to figure it out."

There are fewer mysteries these days, however, as the lab no longer accepts samples from out of state. It used to run more than 8,000 samples per year, but now tests about 1,200 service samples from New York industry and growers and 800-900 regulatory samples from the state's Department of Agriculture and Markets per year.

There is also fewer staff to handle the workload, due to increasingly limited resources. Wicksall remembers a time when she had about a dozen colleagues. Now there are four. Another, like herself, works part time.

Although the lab's capacity to offer service testing has slightly diminished in favor of official inspections, Wicksall said she does her utmost to help farmers as best she can.