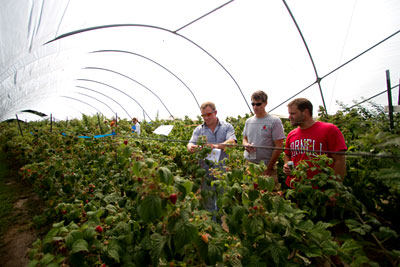 Rob Way/NYS Agricultural Experiment Station, Geneva
Cornell breeders will work with berry growers across the state to test new varieties in their fields, as part of a new agreement with the New York State Berry Growers Association.

Through a new agreement between the New York State Berry Growers Association (NYSBGA) and the Cornell berry breeding program, raspberry and strawberry growers across the state will evaluate elite selections from the university in their own fields.

"The industry was looking for a way to provide stable support for Cornell berry research and variety development," said Dale Ila Riggs, NYSBGA president and co-owner of The Berry Patch in Stephentown, N.Y. "When we learned that hands in the field are one of the biggest limiting factors in evaluating new berry varieties, we offered to be those hands." The arrangement, she said, "could also be a blueprint for other industry groups who want to directly support the research that benefits agriculture in New York state."

As part of the agreement, participating members of NYSBGA will plant test selections in their fields and provide evaluation data collected from their trials to Cornell.

"Growers will give us feedback on how the flavor, yield, color and disease resistance compare to other varieties they are growing," said Weber, associate professor of horticulture based at Cornell's New York State Agricultural Experiment Station in Geneva. "The most important question for me is whether they'd want to plant more."

The collaboration will also lead to more thorough testing because the large-scale, commercial plots result in a statewide planting that is 200-fold larger than Weber's evaluation plots.

"Strawberries are unique among fruits because they are grown across New York state, from the tip of Long Island to the Pennsylvania border, which represents many different microclimates," said Paul Baker, NYSBGA executive director. "This partnership will provide crucial data on how a new variety performs in different soil types and under different climatic zones, something an individual researcher would never be able to afford to collect."

Growers will benefit from the opportunity to test-drive new varieties before their release and having direct input on new releases in the breeding program. And according to Baker, growers want to maintain the steady stream of new varieties that is key to whetting consumers' appetites for farm fresh fruit.

"The berry growers are a unique group of individual farms who pool their resources for the collective good of the industry," said Baker. "Our agreement is a clear signal to Cornell that if they will do the breeding and research, we are willing not only to invest, we want to work directly with them."

Once a strawberry or raspberry plant is chosen by Cornell for commercial release, growers will be able to obtain licenses to sell and distribute the new variety for commercialization purposes by contacting Jessica Lyga, plant varieties and germplasm licensing associate for the Cornell Center for Technology Enterprise and Commercialization. The first berry to be tested through this program will be a strawberry variety ready for evaluation next spring.

Amanda Garris is a freelance writer for the College of Agriculture and Life Sciences.

Correction: The story has been corrected to reflect that Dale Ila Riggs is a woman. The Cornell Chronicle regrets the editing error.