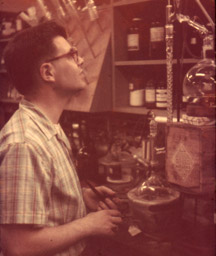 Melvin (Mel) Goldstein, a valued member of Cornell's chemistry community over many years, died at age 78 May 13 in Beer Sheva, Israel, after a protracted illness.

Goldstein was a physical organic chemist, deeply interested in the detailed sequence of microscopic steps by which molecules, organic molecules, transform. The elegance of experimental design in his studies of mechanisms was striking. He also came up with bicycloaromaticity, a new idea for stabilizing organic molecules, and made the first example of this kind, a so-called "[3.5.3] armilenyl" cation.

Goldstein was also at home with complicated, interconnected networks of organic reactions, and the rates of interconversion of molecules involved in such networks. He came up with a mathematically sophisticated, effective way of solving the problem of many competing reactions. His analysis made it possible, indeed natural, to analyze the concurrent operation of many mechanisms and, in favorable cases, all of them.

Born in New York City in 1933, Goldstein grew up in the Bronx; his first language at home was Yiddish. A proud graduate of the Bronx High School of Science, Goldstein had a lifelong passion for chemistry, and already as a child it was clear he was destined for a life in science. He received his bachelor's degree from Columbia University and his Ph.D. from Yale University, studying under Professor William Doering. He did postdoctoral work at Harvard University before joining the Cornell faculty in 1959, where he advanced to professorial rank.

A lifelong Zionist, Goldstein left Cornell for Israel in 1984. In Israel, he was employed by the Dead Sea Bromine Group in Beer Sheva, where he continued to work until his retirement.

At Cornell Goldstein was a valued, friendly colleague, a source of ideas and chemical alternatives. As the community at large did, we loved his incisiveness of mind, the strong logic in his thinking and the clarity of his vision. Goldstein loved to laugh.

Goldstein was predeceased by his first wife, Mickey Goldstein, and is survived by his second wife, Fira, a sister, three children and five grandchildren. His children fondly remember his boundless energy and positive attitude, his love of camping and hiking, and his fearless enthusiasm.