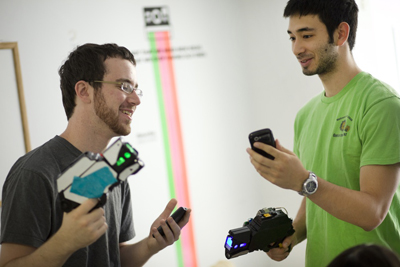 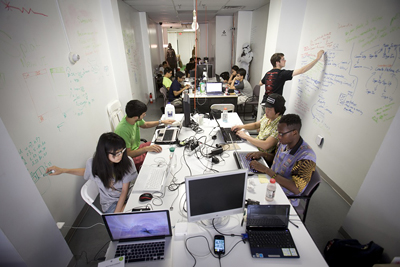 Jason Koski/University Photography
PopShop for entrepreneurs on campus opened in April and is changing the way ideas are brought to market at Cornell.

In a bright Collegetown storefront, you may find several students tinkering on their entrepreneurial projects, by day or night, in the new PopShop, whose motto is "pop in, start up."

PopShop is a new space for Cornell students and Ithaca residents to engage in scheduled programs and chance encounters, to discuss their entrepreneurial ideas, organize meetings for their startups, and receive guidance and support from experienced entrepreneurs on campus.

Located at 206B Dryden Road, PopShop is home to whiteboard walls, a whiteboard table, shelves of books, a wall screen and free popcorn. Its mission: To help students turn ideas into realities. Open since April, the space -- funded by Entrepreneurship@Cornell and Student Agencies Inc. -- stays open 24/7.

"We wanted a place where students from all different backgrounds could come together to collaborate and work on [entrepreneurial] projects they would normally not do together," said Jesse McElwain '13, one of PopShop's founders. "For example, a policy analysis student and a computer science student were both here with friends a few weeks ago, and just by chance they started talking and had a few ideas for companies within just a couple minutes -- solving problems they were independently unable to."

PopShop is open to any student to "pop in" to take advantage of scheduled workshops with an entrepreneur or on such topics as selling, pitching an investment or digital fabrication, social events and just to pick the brains of whoever is around.

"We know there are lots of students with cool ideas, impactful ideas, and often they don't meet other students that might spark a further creative burst and get together. So we wanted to create a space that was student driven and these kinds of connections can be made," said John Jacquette, director of Entrepreneurship@Cornell.

Student Agencies already has an eLab, a business incubator and mentorship program with resources for undergraduates, but it is selective and not free. However, said McElwain, in the near future PopShop will collaborate closely with eLab. "PopShop will manage the space and programming, while the eLab will provide expert mentoring and support from experienced entrepreneurs," he explained.

J.P. Kim '11, who has a startup company called Life Changing Apparel LLC and remains in Ithaca to work on it, is one of several local entrepreneurs who help out at PopShop. Kim says that the PopShop community is all about "networking and reaching out to alumni."

For example, Scott Belsky '02, founder and CEO of Behance LLC, a network for creatives, donated IdeaPaint, a dry erase paint, for empty walls in the PopShop. Students are able to track the design process on the white-board surface.

"We want to make entrepreneurship a big part of our whole campus," said Teddy Brinkofski '13, founder of the startup Hulkshare, who also consults at PopShopas part of the startup Ivy Action Tank, an incubator/accelerator to foster "the startup mentality" among Cornell engineering students.

"Cornell has had a significant entrepreneurial beat to it. We may not end up in the White House, but we have a lot of companies ... and a lot of entrepreneurs," explained McElwain. "Students are excited, and PopShop is here to capture that excitement and turn it into progress."