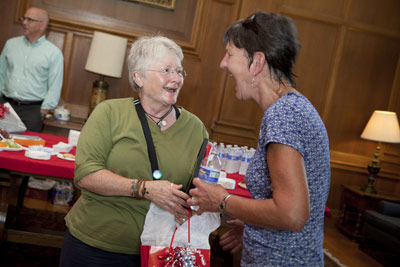 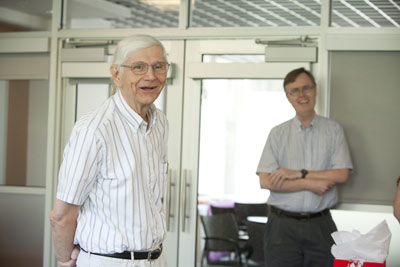 Two Cornell staff members who deal daily with sensitive matters were recently honored with the George Peter Award for Dedicated Service. They are: Michael Skvarla, user program manager for the Cornell NanoScale Science and Technology Facility (CNF), who teaches new students and researchers about toxic chemicals and expensive, detailed research processes; and Cindy Glanville, consultant in the Faculty and Staff Assistance Program (FSAP), who deals with such issues as employee, student and spousal deaths, layoff notifications, mental health crises and work performance.

On June 28, Skvarla received the 180th George Peter Award for Dedicated Service, at a gathering in the Phillips Hall lounge. Presenting Skvarla with a signed copy of Cornell historian Carol Kammen's book "Glorious to View," Mary Opperman, vice president for human resources and safety services, said that Skvarla's diligence, understanding and ability to face challenges have remained constant through his more than 30 years of working at CNF. Skvarla has also given 40 years of service to the Pennsylvania National Guard.

Skvarla's colleague Melanie-Claire Mallison, who nominated him for the award, said that he has an excellent ability to work with and guide people unfamiliar with nanotechnology and nanofabrication.

In her nominating letter, Mallison called Skvarla her "go-to guy" for guiding high school groups on a tour of the facility, noting his "infinite patience with our users and visitors." Donald Tennant, CNF's operations director, wrote that Skvarla is "friendly, philosophical, intellectually curious and helpful to everyone he works with," including the thousands of students he has taught how to safely and mindfully conduct research projects. In other letters of support, Michael Thompson, associate professor of materials science and engineering, wrote that Skvarla's "enthusiasm and his can-do attitude have remained a constant," while Harold Craighead, the Charles W. Lake Jr. Professor of Engineering, wrote that Skvarla has "added his energy and effort to make the environment of the CNF a better place to work and performed outstanding service as an ambassador of CNF to the international research community."

Much of Glanville's work from her office in Collegetown is confidential and behind the scenes. So, when she and Gabriel Tornusciolo, assistant director of the FSAP, walked to Anabel Taylor Hall July 17, she was expecting to attend a meeting -- not to receive the 181st George Peter Award for Dedicated Service.

After Tanya Grove, chair of the Employee Assembly, presented the award to Glanville, Opperman congratulated Glanville for embodying "all of the principles of the award." Opperman said that she and Glanville had often worked together on behalf of staff and faculty, and quoted an excerpt from the nomination letter by Mary Beth Jordan, director of the Office of Human Resources in the College of Veterinary Medicine: "Cindy has enabled individuals to take control of whatever challenge they are facing and truly inspires them with her calm demeanor, valuable perspective and resources, and, most importantly, gives them hope that they are strong enough to tackle these hurdles and not only survive, but thrive."

In his nomination letter, Scott Sutcliff, director of the annual fund for the Lab of Ornithology, wrote that Glanville is "an insightful and knowledgeable counselor ... an acute listener, empathetic, thoughtful and gentle."

Marcia Eames-Sheavly, senior extension associate in the Department of Horticulture; Alan Mittman, director of the Office of Workforce Policy and Labor Relations; and Greg Eells, director of Psychological Services and the FSAP at Gannett Health Center, also spoke on her behalf -- not only in regard to her work-related consultations but also in the individualized, one-on-one consultations she has about personal, marital, family, eldercare and other matters of concern to staff, faculty and retirees.

For her part, Glanville said: "I really love my work. I wake up every day with meaning in my life, purpose in my life. ... I have met marvelous people along the way."

Eric Lee is chair of the Employee Assembly Communications Committee.