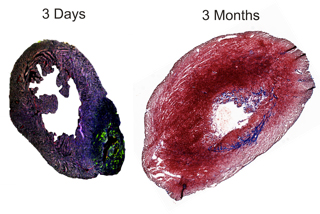 Kotlikoff Lab
The picture on the left shows green c-kit+ precursor stem cells within an infarct (lower right) in a three-day old mouse. These cells are becoming new myocytes and also new vessels. On the right is another image of a heart taken after three months showing a small residual scar (on bottom) remaining from what was an infarct, and new myocytes (red areas) throughout the region.

In a two-day-old mouse, a heart attack causes active stem cells to grow new heart cells; a few months later, the heart is mostly repaired. But in an adult mouse, recovery from such an attack leads to classic after-effects: scar tissue, permanent loss of function and life-threatening arrhythmias.

A new study by Cornell and University of Bonn researchers found that stem cells did not create new heart cells in adult mice after a heart attack, settling a decades-old controversy about whether stem cells play a role in the recovery of the adult mammalian heart following infarction -- the leading cause of sudden death in the developed world -- where heart tissue dies due to artery blockage.

"If you did have fully capable stem cells in adults, why are there no new heart cells after an infarct? And is this due to the lack of stem cells or due to something special about the infarct that inhibits stem cells from forming new heart cells?" asked Michael Kotlikoff, the Austin O. Hooey Dean of Cornell's College of Veterinary Medicine, and senior author of the paper appearing Aug. 29 in the Proceedings of the National Academy of Sciences.

Co-author Michelle Steffey, a small-animal surgeon in Cornell's veterinary college, developed a procedure to infarct a neonatal mouse heart that is only one-tenth-of-an-inch wide. "It was a tour-de-force technically to infarct and recover those baby mice," said Kotlikoff.

To track the stem cells, Kotlikoff and colleagues used a mouse model they developed in which cells fluoresce green when the stem cell marker c-kit is present. In the experiment, after infarction, cells with the c-kit marker fluoresced green in neonatal and adult mice.

"In looking at the adult responses, we were able to prove that the c-kit-marked cells do not form heart cells, but form all of the new blood vessels within the infarct," said Kotlikoff. The stem cells found in the adult heart "have lost the ability to become heart cells," he said. It is known that developmentally single stem cells differentiate into all tissues at the start of life, but over time these cells become "developmentally restricted" or specialized to form only certain tissues, he added.

The study also showed for the first time that vessel stem cells in the adult heart originate there and are not recruited from bone marrow, as has been reported. Those reports have justified a controversial procedure in which bone marrow cells are injected into patients with infarctions.

Sophie Jesty, an associate professor and resident in cardiology at Cornell's College of Veterinary Medicine, is the paper's lead author. Researchers at the University of Bonn analyzed the mice to understand and quantify new myocyte formation.

The study was funded by the National Institutes of Health, New York State Stem Cell Science and the European Union Seventh Framework Programme.