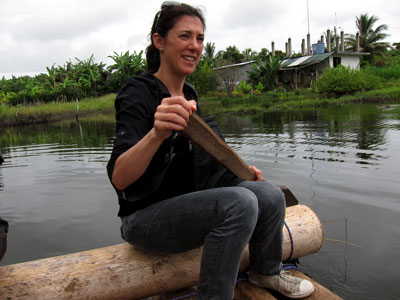 In the early 1990s, while Wendy Wolford was an undergraduate at McGill University in Montreal, she spent a year in Brazil where she volunteered with the largest movement in the country's history -- the Rural Landless Worker's Movement -- which fights for access to land and resources for the rural and urban poor. The experience shaped her life thereafter.

"Since 1993, I have worked with and studied land reform and land tenure dynamics," said Wolford, the Robert A. and Ruth E. Polson Professor of Development Sociology at Cornell.

Wolford became the associate director for economic development at Cornell's David R. Atkinson Center for a Sustainable Future (ACSF) July 1, succeeding Chris Barrett, the Stephen B. and Janice G. Ashley Professor of Applied Economics and Management, who served at ACSF since its inception in 2008.

It is her concern for social justice and its links to sustainability and her desire to answer questions related to access and distribution that make her so suitable for her new appointment.

ACSF's three thematic -- and interdependent -- realms are energy, environment and economic development. Wolford's ACSF role will be to use her interdisciplinary background to facilitate collaborations across disciplines, with specific attention to projects with an economic development focus.

Hailing from a small town outside of Hanover, N.H., Wolford received her B.A. in economics and international development at McGill (1994), before completing her Ph.D. (2001) in geography from the University of California-Berkeley. Before joining Cornell in 2010, she was a faculty member in geography at the University of North Carolina-Chapel Hill (2001-10), with a postdoctoral fellowship at Yale (2004-05).

Wolford's research has focused on social movements and the state in the fight for property and access to land in Brazil and other parts of Latin America. She has studied the history of land distribution in Brazil and how the experience of colonizing the Amazon has vestiges in that country's land reform agencies, which often undermine progress.

Wolford is also an active participant in Cornell's Institute for the Social Sciences, which encourages social science collaborations across disciplinary and institutional boundaries. She is co-leading a three-year theme project on land grabbing and the current global rush to acquire land as concerns over food production and energy issues rise. Wolford helped organize the 2011 International Conference on Global Land Grabbing at Sussex University, and she is planning the second such conference, to be held at Cornell in October.

She also works in the Galapagos Islands to study the growing relationships between farming and conservation, which are being articulated in an effort to reduce food imports and increase native landscapes in the agricultural areas. Last month, as part of a Cornell International Institute for Food, Agriculture and Development's Student Multidisciplinary Applied Research Team, she took four graduate students from across the university to the main island of Santa Cruz, where they conducted a "Market Analysis for Locally Produced Agricultural Products in the Galápagos."

Wolford is the author of "To Inherit the Earth: The Landless Movement and the Struggle for a New Brazil" (2003) with Angus Wright; and "This Land Is Ours Now: Social Mobilization and the Meanings of Land in Brazil" (2010).