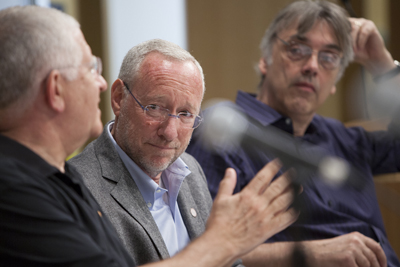 The idea that creativity and complex talents stem from both genetics and the environment and that they both can be learned were recurring themes at "Creativity Examined: An Inquiry Into the Basis of Innovation and a Strategy for Its Promotion," the inaugural panel discussion of Cornell's Leadership Program for Veterinary Scholars, which took place July 30 in the Physical Sciences Building.

Moderated by Richard Cerione, professor of pharmacology and chemical biology at Cornell's College of Veterinary Medicine, five renowned panelists explored innovation in music, literature and the life sciences and strategies for promoting creativity in people who embark on discovery-based careers. About 65 faculty members, visiting international veterinary students and other guests attended.

The range of creative thought allowed in the field of veterinary medicine is immense, said panelist Don Randel, president of The Andrew Mellon Foundation and former Cornell provost and dean of Cornell's College of Arts and Sciences. "I think veterinary medicine is a domain that has tremendous things to offer. You're really obliged to learn different types of things than people who study the human machine."

"What is creativity?" asked Michael Kotlikoff, the Austin O. Hooey Dean of Veterinary Medicine at Cornell. He suggested an answer might be found in the analogy of being in a room and thinking about options to expand its space. "The most creative thing in science is to open a window to another area. Once you've opened that window, lots of people can go through ... . It's opening that window that is the thing we all try to do [as scientists]."

According to Nobel laureate geneticist Oliver Smithies, professor of pathology and laboratory medicine at the University of North Carolina at Chapel Hill, who is credited with inventing gel electrophoresis, there is much more to creativity than what's in one's genes; it comes down to the learning process.

As a child, he said, he lived about five miles from a town that had been home to two Nobel laureates who had gone to the same high school about 20 years apart. "What was that [school] teaching?" he said. "What was being taught [from an early age] was how to think, and that's something you can learn."

"Every healthy baby has immense curiosity," Randel said in discussing how to foster creativity in science. "The big problem in society is that we then tend to beat it out of [children]. The big problem in schools is that kids are bored if they don't stimulate that creativity ... . Imagination: That is crucial to arts and science and every aspect of life; the danger is that society conspires to suppress it at every turn."

"It takes courage," said panelist Roald Hoffmann, Cornell's Frank H.T. Rhodes Professor of Humane Letters Emeritus and a Nobel laureate. "It's just so amazing how much we have in ourselves, the random combinations of what goes into this: our genetic material, our parents and our teachers, the papers we read, the random chance ... just have the courage [to speak]."

Panelist Professor Elizabeth Simpson of the Department of Medicine at Imperial College, London, spoke about the need to interact with other human beings in creative work.

Open to the community, the learning session was host to veterinary students in the Leadership Program, a summer research-oriented initiative for about 25 vet students from around the world seeking to influence the profession through a science-based career.