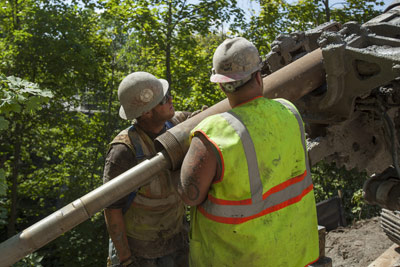 Robert Barker/University Photography
Workers from Pike Company of Rochester, N.Y., drive piles 40 feet into the gorge slope adjacent to the Stone Arch Bridge. The work is part of the installation of steel mesh nets that will be suspended under the bridge. 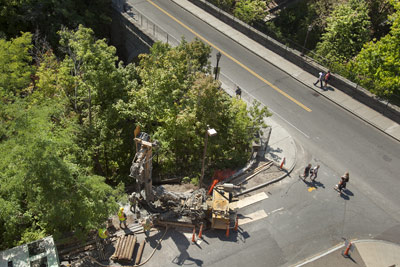 Cornell has begun installing steel-mesh net systems on seven gorge bridges as part of its comprehensive approach to suicide prevention.

The net systems should be installed by Jan. 1, 2013, said John Keefe, project manager. "It's going well. We're right on schedule," Keefe said. However, extreme weather could cause delays, he cautioned.

It will take two to three weeks to complete each bridge, Keefe said, and the project has been split into three overlapping phases. Phase 1 involves simultaneous work on the Stone Arch Bridge, Trolley Bridge and Thurston Avenue Bridge. Phase 2 entails installation on two Stewart Avenue bridges and Beebe Dam Bridge.

These bridges will have horizontal nets installed underneath them, extending about 15 feet out on both sides. The nets are made of 3-millimeter steel cables spaced 5.5 inches apart.

Phase 3 involves the Suspension Bridge, which, unlike the other bridges, will be wrapped in the steel mesh. "The nature of a suspension bridge is much different from a truss bridge," Keefe said. "It moves, up and down and horizontally. Due to the structure, we couldn't do a below-deck system. That's why we went with this system; I call it a 'sock.' It basically wraps the bridge itself."

The temporary black fences on the bridges will be removed only after each bridge's net system is installed and video cameras and thermal cameras are in place and linked to Cornell University Police, Keefe said.

"Restricting access to means of suicide is a standard component of suicide prevention," he said. Bridge barriers, including net systems, have significantly reduced or eliminated jumping deaths where they have been used, he added.

Cornell has designed the installation to minimize traffic delays, and one lane of traffic will be open at all times on the vehicular bridges, Keefe said. However, the pedestrian bridges will be closed while their nets are being installed, he said.