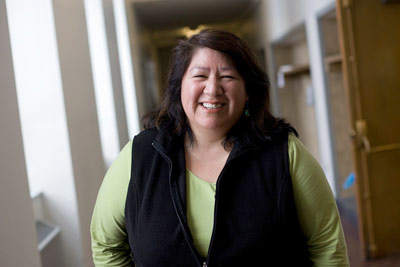 Although she moved from Arizona's Hopi Reservation to Southern California at age 6, Angela Gonzales returned there each summer to take part in ceremonies and to be with her grandparents. Today, armed with three Harvard degrees and funding from the National Institutes of Health, she returns often to Hopi ancestral land to conduct research and offer health education and intervention programs to her people.

Research by Gonzales, Cornell associate professor of development sociology, has led to two NIH-funded projects at Hopi. The first, studying the human papillomavirus's (HPV) association with cervical cancer, involves education and community-based intervention. The second project will assess the impact of those education efforts and offer in-home HPV testing kits to Hopi women.

As an enrolled member of the Hopi nation, Gonzales is able to navigate the tribe's sensitivities. "Cultural beliefs in native populations vary, but in general a lot of native people believe in using traditional forms of medicine and healing practices," she says. "Oftentimes Western medical science is seen as antithetical to traditional values."

The road to health

Gonzales -- who is on sabbatical leave from Cornell this year -- wanted to do something special to celebrate her upcoming 50th birthday. On Sept. 25, Gonzales will begin a 30-day, 1,539-mile bicycle ride from Bellingham, Wash., to Ventura, Calif., to raise funds for the Hopi Cancer Assistance Fund, which helps defray patients' travel expenses. When Hopi seek treatment, they must travel more than 550 round-trip miles from the reservation to Phoenix or another city, and travel is not covered by health insurance.

"I'm raising funds for this community because of the research I do there as well as the fact that I'm a community member," she says. "Engaged research ties together the land-grant mission of Cornell and the College of Agriculture and Life Sciences, and it's very exciting to see its impact on Hopi people."

To promote her ride, Gonzales has created a blog -- Angela Bikes 4 Hopi -- where she will post updates on her ride as well as information about her research with the Hopi Nation.

Traditional Hopi healing, Gonzales says, focuses on the whole person rather than the disease: "As Hopis, we're embedded in family, community, culture and society, and healing must focus on both the person as well as their family and community." As a community-based researcher, she works with tribal programs to develop culturally sensitive interventions as well as with tribal leaders to implement health care policies to improve the health and wellness of all tribal members.

American Indian women have one of the highest incidences of cervical cancer mortality of any racial or ethnic group. "As a sociologist, I believe in the social determinants of health," Gonzales says. "I recognize the role of genetics in people's health, but my focus is on those things in Native Americans' environment that they have control over: diet, activity level and preventive screening."

Gonzales is developing programs to educate women and girls about HPV -- a common virus, several strains of which cause cervical cancer -- and the HPV vaccine, which requires three doses within a six- to 12-month period. Gonzales is drawing on the Hopi storytelling tradition to overcome sometimes strong reluctance to even speak of cancer.

"There is a pervasive cultural belief that when people are ill, in some way they've brought it on themselves," she says. This is especially true of cancer, which claimed both of Gonzales' maternal grandparents.

Part of the educational outreach efforts includes creating digital stories in English and Hopi that feature Hopi parents and girls talking about the importance of getting vaccinated against HPV. "The hope is that hearing stories from people in the community will empower others to acknowledge their own health issues and to communicate about it."

Women and girls play an important role in the matrilineal Hopi culture and are seen as the carriers of tradition. "Parents want to protect the health of their girls," Gonzales says about the focus group discussions with Hopi parents. "We are still analyzing the data, but we believe these programs are having a positive impact. The real test of our success is whether we find that the girls receive all three doses of the HPV vaccine."

Hopi culture is changing. In the past five years, two former tribal leaders publicly acknowledged their cancer, although one refused treatment because Hopi culture holds that one's life and death are preordained. "I'm a huge advocate of preventive screening and treatment, but for them to be successful we have to be respectful of cultural beliefs," Gonzales says. "By developing educational programs and health messaging in a Hopi context, people are much more receptive to it."