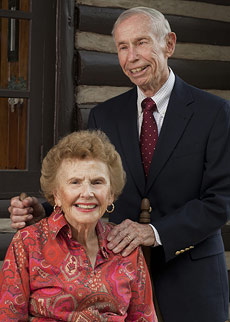 Competition is a driving force not only in business but also in higher education, believes Arthur Wolcott '49, founder and chairman of Seneca Foods Corp., the largest processor of canned vegetables and fruits in the nation. This year he and his wife, Audrey, and the Seneca Foods Foundation made a $20 million commitment in support of Cornell's Award Match Initiative (AMI). Launched in fall 2011 as the third wave of significant financial aid enhancements begun in 2008, the AMI matches need-based financial aid offers from any of the seven peer schools in the Ivy League (as well as Duke, MIT or Stanford) to benefit undergraduate applicants extended admissions and aid by these schools and Cornell.

While strengthening Cornell's financial aid for all eligible students, the gift also provides leveraging power for student-athlete recruitment, according to Andy Noel, the Meakem*Smith Director of Athletics and Physical Education.

"Art Wolcott's extraordinary financial commitment to ensure that Cornell's recruits receive need-based financial aid equal to our Ivy League peers impacts the quality of Cornell athletics profoundly," Noel says. Pointing to disadvantageous differences such as peer schools' endowment sizes and need-based aid calculations, he explains: "For decades, an imbalance in the financial aid landscape within the Ivy League has been a serious challenge. ... Art's support will allow radical change for the better."

A life member of the Cornell University Council who was appointed a presidential councillor in 1991, Wolcott has been a loyal and generous supporter of Cornell's athletics program -- particularly football -- among other areas of the university. He is also a former chairman and member of the Athletics Advisory Council and has served on the Athletics Campaign Committee.

"Athletics is important in building the Cornell University brand," Wolcott explains. Using the men's basketball team's excellent performance in 2010 as an example, he adds that winning teams can create great excitement within the Cornell community and generate wide interest and attention from audiences around the nation. Underscoring the need to support the AMI in keeping pace with Ivy League peers, he says: "If we neglect athletics we will miss the opportunity of attracting outstanding people. We should compete against our rivals in a way that will make athletics very important while continuing to make academics most important."

Barbara Knuth, vice provost and dean of the Graduate School, who also oversees undergraduate enrollment, emphasizes that the initiative "can bring to Cornell a highly qualified and deserving student body." She adds, "The universities that we are matching against are the top universities in the country, so arguably the students who are admitted at multiple institutions within that very elite group of undergraduate institutions are truly among the best students that any of us can hope to enroll."

An entrepreneur who started his business by purchasing a bankrupt grape juice company in Dundee, N.Y., two months after graduating from Cornell in 1949, Wolcott sees the gift as an initial investment to increase the university's future competitiveness. "This is just the beginning. We need to raise significantly more to make this program successful," he says. "Others are going to have to step up and support it, too, if they want Cornell to have a fighting chance against our peers."

Jose Perez Beduya is a staff writer in University Communications.