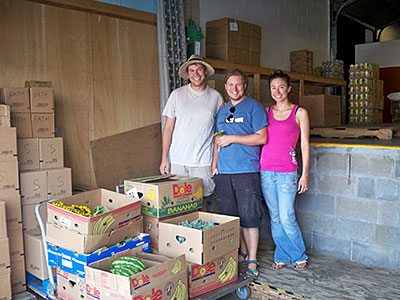 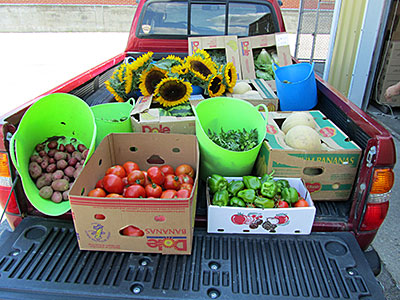 John Gottula
Thirteen truckloads of produce were delivered to the Geneva Center of Concern this summer.

For more than 125 years, Cornell's New York State Agricultural Experiment Station (NYSAES) in Geneva has been addressing the needs of New York consumers, food businesses and farm families via research. This summer and fall, NYSAES is responding directly to another pressing community concern: hunger, by donating about 40 bushels of produce to the food pantry at the Geneva Center of Concern.

"We often share produce from our student garden and research trials with NYSAES faculty and staff," said Carly Summers, a graduate student and member of the Student Association of the Geneva Experiment Station (SAGES). "But we were eager to share the harvest beyond campus."

For guidance in how to get started, graduate student John Gottula, SAGES garden coordinator, reached out to the Community Partnership Board, a student organization of the Public Service Center at Cornell, which provided a start-up grant for the project. "They were integral to our success," Gottula said. "Before we knew it, we were transforming a student hobby garden into a full-fledged food donation program."

SAGES has since delivered 13 pickup-truck loads of vegetables and melons. Cheryl Toor, director of the Geneva Center of Concern, said more than 90 percent of those donations have already been distributed to families, and the surplus sent to the Seneca House of Concern in Seneca Falls, N.Y.

"Summer is our busiest time of year as families struggle to replace the meals their children receive at school during the rest of the year," said Toor. "We've simply never had this abundance -- or this quality -- of produce to offer them."

According to the U.S. Department of Agriculture, 13 percent of New York households were considered "food insecure" during 2009-11, a 2 percent increase over the three years prior. The SAGES project joins several others at Cornell helping to meet this growing need. The Cornell University Agricultural Experiment Station has donated more than 1 million tons of produce from its Homer C. Thompson Vegetable Research Farm in Freeville, N.Y., since 2004, and both stations collaborated with Cornell Cooperative Extension in 2011 to launch the Cornell Gleaning Project, which connects area farmers to local food banks.

"I'm so proud that students and faculty in Geneva are part of this effort to get food directly from those who grow it to those who need it most," said Thomas Burr, associate dean of the College of Agriculture and Life Sciences and director of NYSAES. "We grow a tremendous amount of healthy and delicious food at NYSAES, and the entrepreneurial spirit of these students is making sure none of it goes to waste."

Kate Frazer is the agricultural experiment stations communications officer at the College of Agriculture and Life Sciences.