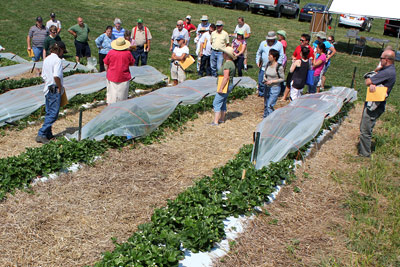 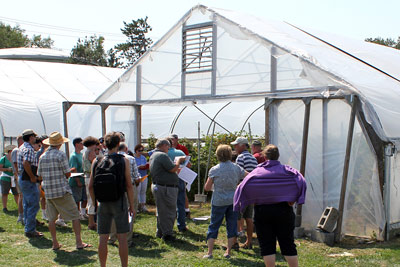 Craig Cramer
High tunnels extend the season and improve the quality of raspberry crops, and make it possible to grow crops such as figs and blackberries that don't normally overwinter in New York.

It's been a tough year for New York's berry growers. But that didn't stop more than 80 from attending the Small Fruit Open House at Cornell Orchards Aug. 31. There, they saw how the latest research can help them extend their harvest season, manage nutrients and try new crops.

"Berry growers got hit with a triple-whammy this season," says Cathy Heidenreich, extension berry specialist in Cornell's Department of Horticulture.

Following mild winter weather and an unprecedented early season heat wave, many growers woke up to flower-killing frosts in the spring, she explains. Then drought in many locations further reduced harvest potential. And finally, a tiny exotic fruit fly pest spread to many parts of the state, ruining fruit in mid-to-late summer.

"There's not much we can do about the frost, but we're encouraging growers to consider installing drip irrigation as a cost-effective way to deal with drought," says Heidenreich. "It's the fruit fly that really has everyone worried."

That fruit fly, Drosophila suzukii (known as the spotted wing drosophila or SWDt), is an Asian native that first appeared in the United States in California in 2008. It then spread to the Southeast and finally showed up in the Hudson Valley late last season.

To the untrained eye, SWDs resemble the fruit flies that often buzz around overripe fruit on the kitchen counter. The big difference is that they can pierce unripe fruit and lay eggs inside, where larvae can develop unnoticed. "Many berry growers are closing early this season, leaving their fall crops unharvested rather than risk a bad experience for their customers," says Heidenreich.

Coping with SWDs will be challenging, she adds, in part because New York berry growers are a different breed. According to a 2007 Cornell study, 73 percent grow on 6 acres or less, so their operations are relatively small; 79 percent sell at least some of their harvest through farm stands, farmers markets or U-pick operations, so they know their customers personally. And more than 90 percent are low- or no-spray (17.5 percent grow organically).

"There aren't many pesticide options available to berry growers, and many are reluctant to adopt intensive spray programs," says Heidenreich. "That means they'd have to invest in sprayers and protective equipment and spend time monitoring pest populations. That's not why most of them started growing berries. This pest could be a life-changing experience for them."

Cornell entomologists are seeking funding to find ways of managing this new pest. Despite the lack of funding, they and others are working together to monitor SWDs as they move across the state. By mid-September, they detected SWDs in 30 counties from Long Island to western New York. (For pest alerts and SWD distribution map, visit: http://www.fruit.cornell.edu/berry/pestalerts.)

At the field day, growers toured high tunnels -- unheated greenhouses that extend the harvest and improve the quality of bramble crops, as well as make it possible to grow crops that don't normally overwinter in New York, such as figs and blackberries. High tunnels can also protect crops from late freezes such as the one that occurred last spring. Growers also viewed a low-tunnel production system that similarly protects crops from frost and allows earlier harvest of ever-bearing strawberries in spring while extending the season well into fall. Growers were also introduced to new berry crop possibilities, including juneberries, currants, gooseberries and elderberries.

"Berry growers are hardworking and creative," says Marvin Pritts, berry crop specialist and chair of the Department of Horticulture. "Their ideas and perseverance -- coupled with ideas generated and tested at Cornell -- will allow berries to continue to be an important and vibrant component agriculture in the Northeast for years to come."

Craig Cramer is a communications specialist in horticulture.