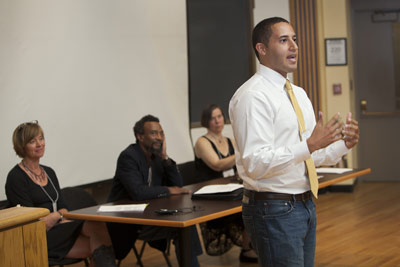 Social entrepreneurs create for-profit or nonprofit ventures that have as their principle driver a social mission, said Anke Wessels, executive director of the Center for Transformative Action, speaking on the panel "The Promise of Social Entrepreneurship: Creating a Local Economy that Works for Everyone" Sept. 13.

The panel was part of the first annual, three-day Finger Lakes Social Entrepreneurship Institute, which attracted some 100 social entrepreneurs from the nonprofit and for-profit sectors to work toward developing a business model around social justice and equity.

Social entrepreneurs are people who "work in, with and through community to find tangible solutions that address the roots of our most pressing social problems," said Wessels. They try to strike a balance between what panelist Kirby Edmonds of the Building Bridges Initiative called the "triple E": equity, environment and economy. The Finger Lakes' entrepreneurs in attendance, he said, play an important role in helping to transform the region's social, economic and political structures.

The Building Bridges Initiative strives to create a "socially just and ecologically sound economy" by physically bringing together people of all ages and backgrounds to talk about issues that affect everyone in the community. As Edmonds pointed out, although most of our problems cross institutional lines, decisions about solutions are too often made by authorities within these lines.

Local First Ithaca, represented on the panel by Jan Rhodes Norman, is a network of local businesses and community members that sponsor programs to educate area residents about supporting a successful local economy that uses resources, experience and inclusiveness to create a thriving and livable community. She recommended that area residents support their local economy by "voting with [their] dollars." Local business owners are struggling, she said, because large corporations are taking over and "pulling retail dollars out of our local economy."

Panelist Svante Myrick '09, mayor of Ithaca, said that "class flight," the process of middle-class and wealthy people leaving inner cities in favor of the suburbs, puts a city in a cycle of decay. He proposed a plan to jump-start Ithaca's economy through local businesses. To control the cycle of poverty, he said, the city must regulate land use. We can reverse decay and poverty, Myrick said, by putting residents of all economic strata nearer to each other. Then, all of these people will be closer to jobs, schools and stores.

Not only will this plan work to decrease structural poverty, but it could also save local businesses, he said. If people live in the center of town, closer to local Ithaca businesses, they will patronize these businesses, "even if the product is a little bit more expensive." The proximity of all types of people to each other would also allow for the exchange of ideas among diverse social groups, stimulating new ideas throughout the community.

If people of all classes live together in a city, they share the cost of the city, Myrick said. "By collectively pooling your resources as taxpayers, you can build a city."

The panel was hosted by the Center for Transformative Action. Funding for the talk was provided by Entrepreneurship@Cornell as part of the Moses and Loulu Seltzer Endowment Fund.

Sarah Byrne '15 is a student intern for the Cornell Chronicle.