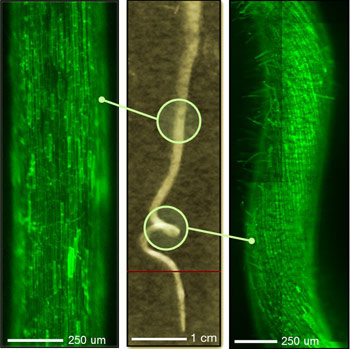 Cohen lab
Staining the roots and imaging them on a confocal microscope reveals that the roots twist around their axes in the helical region but remain untwisted throughout the rest of the root. Further experiments show that this twisting is a biological response of the root induced by longitudinal forces.

The science of how and why plant roots get their shape, it turns out, is a twisted tale: Using 3-D time-lapse imaging, physicists, working with plant biologists, have discovered that certain roots, when faced with barriers like a patch of stiff dirt, form helical spring-like shapes.

Surprisingly, the researchers found this root geometry was largely the result of mechanics -- the same mechanics that determine the stability of beams in buildings. When the roots run into barriers, growth causes compression and eventual buckling. The root senses this obstruction and responds by twisting the root tip. These effects combine to give the root a helical geometry.

From insights gleaned through mathematical modeling, the researchers speculate that the roots are pushing off their environment to get an increased force at their tip, an effect that is enhanced by twisting.

"Evolutionarily speaking, this twisted buckling mechanism improves the fitness of the plant by allowing it to pass through barriers and explore more of its environment," said graduate student Jesse Silverberg, first author on a paper in Proceedings of the National Academy of Sciences published online Sept. 24. Silverberg presented the results in February at a meeting of the American Physical Society.

The discoveries were made in the lab of Itai Cohen, associate professor of physics, and the novel experimental setup was conceived several years ago by co-author and former graduate student Sharon Gerbode. The team collaborated with Maria Harrison, the William H. Crocker Research Chair at the Boyce Thompson Institute for Plant Research, to develop a 3-D laser sheet imaging technique for recording plant root growth.

The setup consists of a laser sheet that illuminates a plane inside a transparent box, which is filled with a dense, translucent gel that acts as the "soil" for the roots. A camera takes a series of images as the box moves through the laser sheet, which effectively scans its contents.

Using software in the lab of Joseph Fetcho in the Department of Neurobiology and Behavior, the researchers then reconstructed 3-D images of how the roots of the legume Medicago truncatula responded to barriers of different stiffness.

The study could eventually assist in breeding crop plants optimized for growth in areas where climate change or over-farming has led to difficult soil conditions, Harrison said.

"There is a growing community of people trying to trace macroscopic morphologies to microscopic mechanics," Cohen said. "The idea is that mechanics plays an important role in growth -- it's not just genetics, but you have physical things that can produce these types of variations and morphologies, and we see this as an important step forward."

The work was supported by the National Science Foundation, Cornell's IGERT Program in Nonlinear Systems and the U.S. Department of Energy.