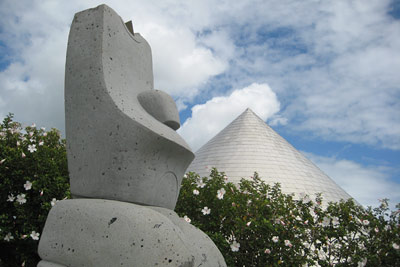 Provided
The Alpha Centauri station includes a large Hawaiian figure that represents the star in female form; an etched 280 mm semicircle below the figure's chin is the size of Alpha Centauri scaled to the Planet Walk model. 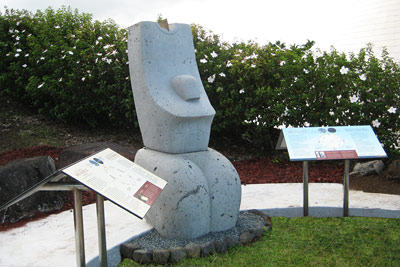 Provided
The new station representing Alpha Centauri is located at the 'Imiloa Astronomy Center on the University of Hawai'i's Hilo campus.

The three-quarter-mile model of the solar system, with tiny spheres scattered across Ithaca representing the planets, will soon be the world's largest exhibition, as it extends to Hawai'i with a station depicting the star nearest the sun.

In keeping with the exhibition's 1-to-5-billion scale, this new station representing Alpha Centauri will be located at the 'Imiloa Astronomy Center on the University of Hawai'i's Hilo campus. The expanded walk will measure 5,000 miles from end to end, handily eclipsing the previous record of 66 miles held by artwork in the subway tunnels of Stockholm, Sweden.

On Sept. 28, the new station will be dedicated in Hawai'i, with a celebration to follow Sept. 29 in Ithaca (see below).

The point of the exhibition, and its expansion, is to give people a visceral feel for the vast scale of the universe and our place within it, said Charles Trautmann, adjunct professor of civil and environmental engineering at Cornell and executive director of Ithaca's Sciencenter, a hands-on science museum that spearheaded the project. "Imagine standing at the Alpha Centauri station on Hawai'i and looking east over the Pacific Ocean. Some 8,000 kilometers away, at another exhibit station in downtown Ithaca is a pale blue dot only 2.5 millimeters in diameter representing Earth.

Sagan Planet Walk celebration in Ithaca
The Sagan Planet Walk will celebrate its expansion to Hawai'i with a free tour of the walk at 3 p.m., Saturday, Sept. 29, starting at the sun station at The Commons in downtown Ithaca. Greg Sloan, senior research associate in Cornell's Department of Astronomy, will lead the tour. Participants are invited to wear Hawaiian garb as the group walks its way through the model solar system, ending at the Pluto station at the Sciencenter where Hawaiian-inspired refreshments will be served.

"Carl Sagan, the Cornell astronomer for whom the planet walk is named, captured the experience so eloquently: 'The Earth is a very small stage in a vast cosmic arena. ... To me, it underscores our responsibility to deal more kindly with one another and to preserve and cherish the pale blue dot, the only home we've ever known,'" Trautmann said.

Dedicated in 1997, the walk begins with the sun station on The Commons pedestrian mall in downtown Ithaca. Until now, the walk has ended at the station representing the dwarf planet Pluto, located three-quarters of a mile away at the Sciencenter. In between, the exhibition features a station for each planet, with interesting facts and a scale model of the planet. There is also a 4.5 billion-year-old, touchable meteorite at a station representing the asteroid belt.

The Alpha Centauri station was part of the walk's original design, Trautmann said. But it was only in the past two years that a partnership and funding emerged from the Sciencenter, 'Imiloa Astronomy Center, Cornell, the University of Hawai'i and NASA.

The Alpha Centauri station includes a large Hawaiian figure, sculpted in Hawaiian volcanic stone, that represents Alpha Centauri in female form; an etched 280 mm semicircle below the figure's chin is the size of Alpha Centurai scaled to the Planet Walk model. Hawaiian artist Rocky Jensen dedicates the sculpture to the stewardship of our lands and oceans, and the exploration of the vast cosmos beyond. Graphic panels next to the figure describe the scale of the solar system, the connection with Ithaca and the ways that Alpha Centauri is used by Polynesian voyagers for navigating without instruments across the Pacific Ocean in open, double-hulled canoes.

Cornell's Department of Astronomy has been a key partner from the walk's inception, providing both technical support and funding. It has continued to be closely involved as new features have been added.