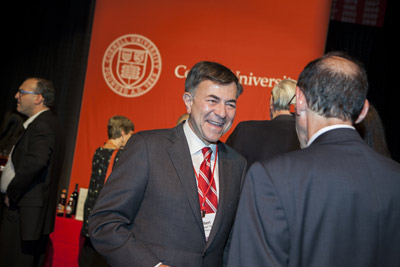 Lindsay France/University Photography
Robert Harrison '76, chairman of the Cornell Board of Trustees, mingles at the Oct. 26 dinner banquet held at Barton Hall as part of Trustee-Council weekend. 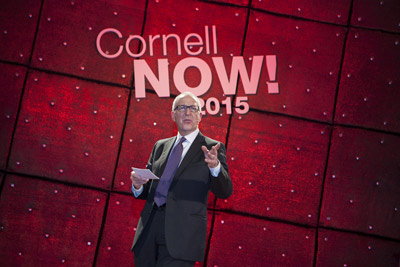 In an event that honored Cornell's tradition of public engagement and its founding as a land-grant university, a dinner banquet at Barton Hall, "Cornell Now: Celebrating Our Land-Grant Mission," was held Oct. 26 as part of the 62nd annual meeting of the Cornell University Council and the Cornell University Board of Trustees.

At a pre-dinner reception, faculty and students staffed tables and displays along the expansive interior of Barton Hall showcasing examples of Cornell's public engagement projects, research and partnerships across its colleges, from in-development apple varieties that are being fast-tracked to supermarket shelves in New York state and programs at Cornell's Public Service Center to a scaled-down working model of the type of water treatment plant that the Cornell student engineering team AguaClara uses to bring safe, clean drinking water to towns and villages in Honduras.

During the dinner, the more than 600 people in attendance were treated to a new, seven-minute video, "Cornell's Land-Grant Mission and the Spirit of Public Engagement," created by Cornell multimedia producer Micah Cormier. The centerpiece of the video, the on-camera creation of a large chalkboard mural by local artist Marshall Hopkins, charted Cornell's historic land-grant founding and how that mission has evolved into the university's global engagement today.

In the video, Robert Harrison '76, chairman of the Cornell Board of Trustees, stated that the university was founded in 1865 with a dual role -- to be both a great, world-class research institution that values scholarship and teaching as well as research, and one that applies the results of that research to help people in the real world.

Rebecca Stoltzfus, the provost's fellow for public engagement at Cornell and a professor of nutritional sciences, also was featured in the video. "While it used to be the case that people would focus on local issues or solutions, it's just a reality of this century that we cannot separate the local from the global anymore," she said in the video.

Terms like "public engagement," "engaged learning" and "community engagement" "are the action words that are the manifestation of the land-grant mission [today]," said Stoltzfus at the event.

"It's an idea that universities remake, over and over again, and we have to keep refreshing it and reconsidering what it means for now," she said, "with all the shaping forces of today -- technology and increased diversity and globalization and a different student generation and the public demand for relevance and career readiness. So that's our creative job: To keep being the land-grant university of the moment."

President David Skorton addressed the trustees, council members and alumni following the screening. "What an amazing and inspiring view of what this university has been, is, and will be," he said.

Attendees also heard updates about the "Cornell Now -- 2015" campaign's progress from chairs Andrew Tisch '71 and Stephen Ashley '62, MBA '64 (more than $3.8 billion has now been raised on the way to the $4.75 billion goal); they and Robert Appel '53, who heads the Weill Cornell Medical College campaign, spoke about what originally motivated their volunteer and engagement work for Cornell.