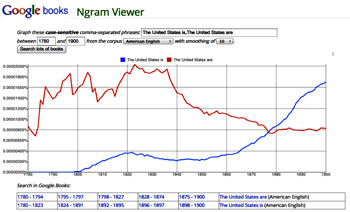 Provided
A digital database of books enables computer analysis, as in this example from Google, cited by the judge who dismissed the Authors Guild lawsuit. The increased use of the phrase "the United States is" in place of "the United States are" is seen as reflecting growing acceptance of the idea of a strong central government. Click to enlarge

A federal district court has dismissed a copyright infringement suit brought by the Authors Guild that would have prevented the digitizing of books by university libraries and restricted use of many of the digitized works.

The Oct. 10 ruling will allow HathiTrust, a partnership of 69 research institutions, including Cornell, to continue to use a collection of some 10 million books in digital form. Cornell and several other universities will also be able to continue a partnership with Google to scan books from their collections. Cornell also expects to revive its investigation into making digitized books available to blind and print-disabled students.

In 2007 Cornell joined five libraries whose books are scanned for the Google Books Library Project, which now offers a searchable database of some 20 million volumes contributed by libraries and publishers. Public domain works can be read in full online; users may see only snippets of copyrighted works, with links to buy the book. Cornell had been digitizing small collections of specialized materials for 15 years, accumulating perhaps 15,000 volumes up to that point, according to Peter Hirtle, senior policy adviser in Cornell University Library. With the Google project, the library began shipping about 5,000 to 6,000 items to Google for scanning every four weeks. The amount fluctuated over the years, and now is about 4,000 items every six weeks.

"It is a tremendous benefit to have a partner like Google that has the capacity and most of all is willing to pay for scanning," Hirtle said.

In 2008 Cornell joined HathiTrust, a consortium formed partly to ensure that the books digitized by libraries would be preserved if Google were to discontinue its project. More than 400,000 Cornell volumes have already been contributed to HathiTrust's repository of more than 10 million, including many rare, out-of-print, and deteriorating materials, and more are added as they are digitized. The HathiTrust collection is searchable like Google's and includes specialized tools for scholars that allow, for example, searches of word frequency over the entire database.

Some HathiTrust member libraries are developing plans to make copyrighted works available in full to visually impaired users. The Authors Guild objected to this in its lawsuit, which was directed at HathiTrust and five universities, including Cornell, and to a plan (now dropped) to enable some access to "orphan works" whose copyright owners cannot be found. The lawsuit contended that just the act of making a digital copy violates the law, claiming the scanning constituted "one of the largest copyright infringements in history." The suit asked that copyrighted works be removed from the database, at least until Congress could clarify the situation.

The judge acted on a summary motion to dismiss. The case did not go to trial. The plaintiffs have 30 days to decide to appeal. The decision does not affect the Authors Guild's separate lawsuit against Google.

Anne Kenney, the Carl A. Kroch University Librarian, praised the judge's opinion, saying "Libraries have traditionally been highly respectful of copyright while at the same time trying to do all they can to foster research and learning. The decision is a win-win for all involved. ... The benefits that arise from the mass digitization of our printed collections, the reason why Cornell joined the Google project in the first place, will continue. I am particularly excited that we may be able to increase the easy availability of library material to visually impaired students."

Gwen Glazer is the staff writer for Cornell University Library.