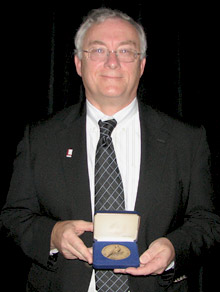 Daniel Decker, Cornell professor of natural resources, has received the highest national award in wildlife sciences from The Wildlife Society.

Decker received the Aldo Leopold Award at the society's 19th annual conference in Portland, Ore., Oct. 13-18. The Wildlife Society is a nonprofit scientific and educational association that promotes the study, management and conservation of wildlife resources.

The prize is awarded to researchers who have worked to integrate human dimensions, including socio-political issues, into the traditionally biologically oriented field of wildlife management.

Decker has "played a unique and seminal role of bringing wildlife into the human context," said Evan Cooch, associate professor of natural resources.

Decker received his B.A. in 1974, M.A. in 1976 and Ph.D. in 1986, all from Cornell, where he joined the faculty as an assistant professor in 1988. He is considered a pioneer among wildlife scientists for recognizing the importance of human dimensions in his field, and he has been instrumental in helping state and federal agencies apply such issues into their management of wildlife resources.

Since 1982, Decker has been co-leader or director of the Human Dimensions Research Unit, an internationally renowned group that has trained many wildlife professionals in the area of integrating human issues in managing wildlife. The unit has grown to 27 faculty, staff and graduate students. He was his department's Cornell Cooperative Extension program development and evaluation specialist from 1986 to 1988.

"Early on, he was involved with issues related to human-wildlife interactions and quickly realized that stakeholders should be involved in decision-making processes to improve wildlife conservation," said Paul Curtis, associate professor of natural resources. "Public engagement has been the cornerstone of Dan's applied research and outreach programming."

Decker eventually became department extension leader in natural resources (1988-91), where he coordinated the efforts of extension and outreach programs; served as department chair for natural resources (1993-96); director of the Cornell University Agricultural Experiment Station (2001-05); and director of the College of Agriculture and Life Sciences Office of Land Grant Affairs (2005-09).

Decker's research and outreach work has promoted a long-term vision of wildlife management by addressing how human dimensions have impact in such areas as suburban wildlife, adaptive harvest management, community-based management, hunter retention and wildlife habituation in national parks.

Along with mentoring many notable graduate students, Decker has had more than 130 publications, including seminal papers and books on wildlife and human dimensions that have introduced new ideas to the field.

"His efforts across the board have been visionary and have challenged professionals to help them become better leaders, decision makers, and overall stewards in trust of natural resources," according to the award statement from The Wildlife Society.