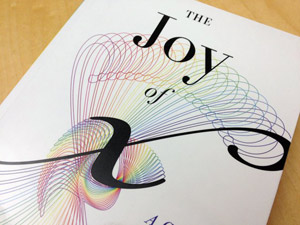 How many people should you date before settling down? How should you flip your mattress to get maximum wear? How does Google search the Internet? These seemingly unrelated questions and more are answered by Steven Strogatz, the Jacob Gould Schurman Professor of Applied Mathematics, in his new book, "The Joy of X: A Guided Tour of Math, From One to Infinity" (Houghton Mifflin Harcourt).

According to Strogatz, "'The Joy of X' explains some of the most elegant ideas in math and shows their surprising connections in our daily lives. We'll see how Michael Jordan's dunks help explain the fundamentals of calculus. ... We'll spot sine waves in zebra stripes and find echoes of Euclid in the Declaration of Independence."

The book, a follow-up to his popular "Elements of Math" series of columns for The New York Times, explores math in a way that is accessible to the general public. Strogatz says he wrote the book because there seemed to be demand for a book about math that approaches the subject in a way most people can understand. In the book, he explains how math relates to such seemingly dissimilar topics as literature, philosophy and law. "Math is everywhere if you know where to look," Strogatz says.

His research has often involved applying mathematics to explain real-world phenomena such as "the dynamics of the human sleep-wake cycle … [or] biological oscillators, such as swarms of synchronously flashing fireflies," Strogatz says.

He is the author of a 1998 Nature paper on "small-world" networks (commonly referred to as the six degrees of separation), which was the most cited paper on networks across any scientific discipline for the next decade. He "loves branching out into new areas, often with students taking the lead," Strogatz writes on his website.

Mikhail Yakhnis '14 is a writer intern for the Cornell Chronicle.