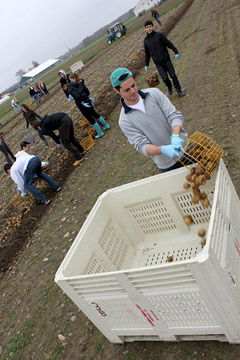 Craig Cramer
Sam Rosenberg '14 was one of several Cornell students who participated in the potato gleaning event Oct. 27.

Since 2004 Cornell has donated more than 1 million pounds of produce from its Homer C. Thompson Vegetable Research Farm to support families in need. About 20 volunteers added 5 tons of red and white potatoes to that total Oct. 27.

The potato gleaners were participating in Make a Difference Day, an annual day of volunteering established 22 years ago by USA Weekend Magazine. To mark the day locally, the Food Bank of the Southern Tier and Gannett Co., USA Weekend's parent company, dispatched about 250 volunteers to five sites in the region, including the research farm in Freeville, N.Y.

"This is our first time participating in Make a Difference Day, and it's the largest volunteer effort we've ever organized," said Natasha Thompson, president and CEO of the Food Bank of the Southern Tier.

Thompson said Gannett approached them because the company was looking for a way to engage their staff locally, and the Food Bank of the Southern Tier covers the same counties as their newspapers. Volunteers selected from activities including repacking backpacks with donated food, food delivery, cooking meals in a community kitchen and gathering potatoes.

"We knew immediately that the farm would be one of our sites," said Thompson. Farm manager Steven McKay and Robin Bellinder, professor of horticulture, have a history of close collaboration with the food bank, and the farm is one of its biggest food donors.

"Out here, people get a better sense of the amount of food needed to feed 11,000 people each week, and where it all comes from," Thompson said. "It also introduces volunteers to our partners, who play a crucial role in our work."

As a primary location for the College of Agriculture and Life Sciences' vegetable research, the farm was founded to help faculty learn to grow vegetables well. Run by the Cornell University Agricultural Experiment Station (CUAES), the plots give faculty the chance to test new varieties and evaluate their responses to different conditions and growing methods. Developing sustainable and organic growing techniques is one major area of research.

Bellinder began the farm's food donation program in the late 1990s after realizing that produce from her projects and those of other faculty could wind up on dinner tables instead of in compost bins. Since then, she's worked with McKay to organize donations each harvest season to support the Food Bank of the Southern Tier, as well as other area food donation organizations including Ithaca's Friendship Donations Network and Cortland's Loaves and Fishes program.

"We've delivered many donations over the years, but it's great to have volunteers out here gathering food themselves. It makes a difference to actually dust off the dirt and fill baskets," Bellinder said.

"These volunteers have made a difference in my day, that's for sure," joked McKay. "Otherwise we would have to pick all these potatoes up ourselves."

Kate Frazer is the agricultural communications officer for the College of Agriculture and Life Sciences.