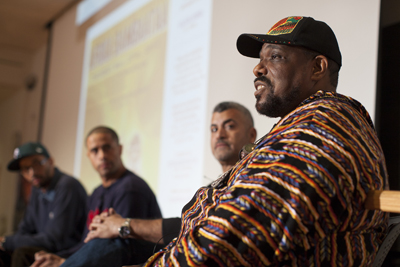 "Most people don't know that rap has always been here. It has come in many different forms throughout our lifetime and many of the songs that you might have heard before ... may have been the hip-hop of that era."

Often credited as the founder of hip-hop, disc jockey Afrika Bambaataa spoke on campus Nov. 27 in the first visit of his three-year term as Cornell's first visiting hip-hop scholar.

In a talk moderated by Richard Medina '92, Bambaataa discussed the origins of hip-hop and the necessity to preserve and maintain the university's hip-hop archives. Bambaataa appeared with b-boy Richard "Crazy Legs" Colón of the Rock Steady Crew and photographer Joe Conzo.

Before its success and integration into mainstream culture, hip-hop was initially a response to social phenomena, gradually evolving into a movement for social change and cultural and ideological diversity.

"Many people didn't recognize it, but when it came to us, we recognized it," Bambaataa said.

Growing up in the 1960s in the Bronx, Bambaataa was exposed to social movements, crime and street gangs. He later co-founded and led a gang called the Black Spades.

There was "broken glass everywhere," he recalled.

This was the time of the Black Panthers and the Young Lords, who were fighting for the people, Bambaataa said. And "you had another group that was crazy as hell, called the Weathermen, who was blowing up stuff all over the city."

Inspired by the Zulu people and their chief, Bhambatha, Bambaataa moved his gang and community in a positive direction, ultimately establishing a hip-hop awareness group called the Universal Zulu Nation.

An eclectic combination of culture, dance and ideology, the Universal Zulu Nation united many youth communities in New York.

"The Universal Zulu Nation stands for knowledge, wisdom, understanding, freedom, justice, equality, peace, unity, love, work and having fun," Bambaataa said. And above all: "Overcoming the negative to the positive."

Bambaataa also stressed the importance of freedom, flexibility and open-mindedness in hip-hop.

"I had a progressive-minded crowd," he said of his career as a DJ. "In hip-hop I did so many mash-ups with different singers. I worked with Johnny Rotten, George Clinton, UB40, Sting, James Brown, the list goes on."

The bottom line, he said, was "we could do whatever we wanted to do, because all of this is part of hip-hop."

Jacques Diec '15 is a writer intern for the Cornell Chronicle.