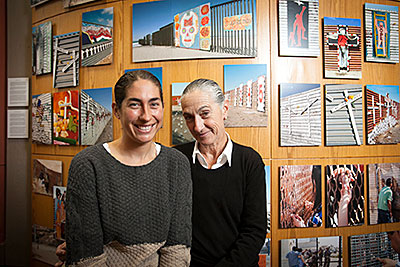 Ana Fernandez introduced herself by explaining that she began her work as a "citizen and observer of the world," and that the lessons she learned while young in Mexico (she moved to the U.S. at age 11) about the double standard imposed on women and their sexuality still linger in her ears, where they influence her art. "The most apparent thing in my work," she explained, "is that it deals with gender and inequalities between male and female."

For example, one of her performance art projects, "Erasing the Border" -- which Maria Fernandez photographed for Ana Fernandez to later paint -- explores representations of gender by performing what she describes as "cleaning activities or domestic chores in private and public spaces" while wearing a little black dress and stilettos. The use of the little black dress and pumps signal status and prosperity, as well as a sensuality, that contrasts with the type of work her performance and paintings depict -- a merging of conflicting spheres that interest the artist.

In her work Ana Fernandez explores the importance of context, and why certain images or behaviors are acceptable or not depending on the circumstances. "When you change the context," she said, "people reevaluate their perspectives." One of the installations she did for this project took place at the border fence between California and Mexico, and while the wetsuit-clad border guards spent an hour arguing with her, ultimately they did not arrest her -- which she attributes to the incongruity of the little black dress she wore.

She described a project in Cape Town that reminded her how powerful art can be at building rapport. Rejected initially because she was believed to be a reporter, once she was identified as an artist, community members enthusiastically joined in to transform the area in which their children played by painting surrounding structures and spontaneously cleaning the area. "[What] the news reporters show is one sided, focusing on the violence and negativity of Cape Town," explained Fernandez. "Art, on the other hand, serves as a medium that allows focus on the everyday beauty of life."

On Nov. 8, Maria Fernandez gave an artist's talk about the exhibit of her photographs of the U.S.-Mexico border, which she has installed at the LSP on the fourth floor of Rockefeller Hall. The exhibit, documenting the growth of the border fence and its human impact, runs until the end of November.

Both Ana and Maria Fernandez's work has been exhibited internationally. In 2011 Ana received the Goldies Award for Visual Artist of the Year; this year "Erasing the Border" was recognized as one of the top 50 public art works by the Americans for the Arts: Public Art Network.

The artists' visit was sponsored by Cornell's Latino studies and visual studies programs and the departments of English, Romance studies, performing and media art, and feminist, gender and sexuality studies.