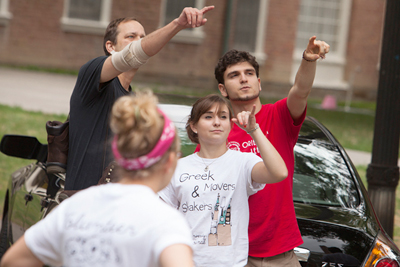 Lindsay France/University Photography
The recommendations seek to maintain the positive aspects of the Greek experience, such as Movers and Shakers, a Greek community service program that welcomes and assists first-year students and their families at the residence halls during Move-In Day.

Saying Cornell has "no tolerance for coercive behavior," Cornell President David Skorton has accepted recommendations aimed at eradicating hazing on campus. The recommendations, which focus on prevention, intervention and response, will be implemented in three phases.

"I applaud the work of students, staff and alumni to design a new membership approach for the Greek community. It is clear that progress has been made through this collaborative process," Skorton said. "It is equally clear that we are not yet where we need to be."

The recommendations are in response to Skorton's August 2011 challenge to the campus community to "end pledging as we know it" at Cornell. Skorton's call followed the death in February 2011 of George Desdunes '13 during an alcohol-related hazing incident.

"The recommendations in the report constitute important first steps toward eliminating the power differential that exists between members and initiates in the period between the acceptance of bids and formal induction, a period that in the past has produced hazing," said Skorton. "That period has now been reduced, and 'probation' has been redefined in substantive, and, I trust, enduring ways. Along with Vice President for Student and Academic Services Susan Murphy and her colleagues, I will continue to work with all interested parties as Phase 1 recommendations are implemented and we move on to the additional cultural and structural changes that must be made in Phase 2."

In Phase 1, which will begin immediately, fraternities and sororities must:

These changes require that students, the university, alumni, and national and international Greek organizations all work together, said Murphy. "We recognize the students cannot accomplish alone all we have set out to do. However, I believe our student leaders in the Greek system are ready to meet this challenge, and with all of our support, will lead other organizations, both here and nationally, in effecting positive change," she said.

Phase 2, to begin in spring 2013, will include the start of formal decision-making about a range of other issues including live-in advisers in chapter houses. This would be perhaps the most effective of the recommendations, said Kent Hubbell, the Robert W. and Elizabeth C. Staley Dean of Students. "It would be a wonderful opportunity to have someone there who will be a sounding board, who could help you through a difficult moment, who would observe when something seemed like a good idea but it actually wasn't. This should be viewed as an opportunity to enrich the experience," Hubbell said.

In Phase 3, during the 2014-15 academic year, training will be coordinated and standardized for live-in, chapter and alumni advisers, and consistent academic standards will be established for the Greek system.

The new policies are the result of more than a year of work.

To meet Skorton's August 2011 call, alumni and student leaders assembled a task force called Recruitment, Acceptance, Retention and Education (RARE), charged with drafting recommendations. Travis Apgar, the Robert G. Engel Associate Dean of Students and primary liaison between the Greek community and the university administration, Hubbell and Murphy combined those recommendations with those from other stakeholders, including the Fraternity and Sorority Advisory Council, to develop the initiatives that Skorton has endorsed.

Cornell is home to one of the largest Greek systems in the country. More than 4,000 students -- nearly one-third of Cornell's undergraduate population -- belong to one of 66 chapters on campus. During the past 10 years, nearly 60 percent of Cornell fraternity and sorority chapters have been found responsible for activities that are considered hazing under the Cornell Code of Conduct, Hubbell said. The code defines hazing as any act that, as a condition for group membership, humiliates, intimidates, abuses or endangers any person -- regardless of the person's consent to participate. Hazing is also a violation of New York state law.

"These recommendations offer a phenomenal opportunity for the Cornell Greek community to preserve the positive components of the experience, while identifying the next evolution of Greek life. Our students will rise to the challenge and continue to demonstrate why this community is considered a national leader," said Apgar.