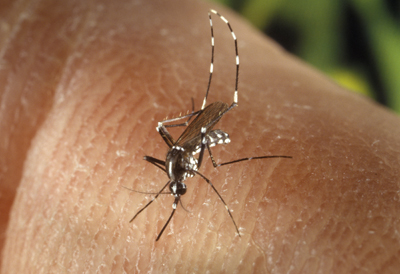 CDC/James Gathany
Asian tiger mosquitos are now established up the East Coast into New Jersey and are rising in numbers in New York City.

Global travel and climate warming could create the right conditions for outbreaks of a new virus in this country that is carried by an invasive mosquito spreading across the U.S., according to a new Cornell computer model.

The model predicts that outbreaks of chikungunya (CHICK-en GUN-ya) could occur in 2013 in New York City during August and September, in Atlanta June through September, and year-round in Miami. Chances of an outbreak are significant once the disease is introduced in each location.

The probability of a disease outbreak was correlated with temperature, as warmer weather allows the invasive Asian tiger mosquito, which transmits the virus, to breed faster and grow in numbers, according to the study published in the November issue of PLOS Neglected Tropical Diseases.

Asian tiger mosquitoes were introduced to the United States in Texas in the 1980s; they are established up the East Coast into New Jersey and are rising in numbers in New York City. The aggressive mosquito outcompetes local varieties and transmits more than 20 pathogens, including chikungunya and dengue.

Chikungunya symptoms include a fever, severe joint pain, achiness, headache, nausea and fatigue, as well as "debilitating and prolonged" pain in the small joints of the hands and feet, according to the paper.

Originating in Central Africa and endemic in Southeast Asia, chikungunya has been brought into the country via infected travelers.

Just a decade after being introduced in Rome, the Asian tiger mosquito has become the predominant local species, said Laura Harrington, associate professor of entomology and the study's senior author. In 2007, Italian officials reported the first local transmission of chikungunya fever.

"The virus is moving in people, and resident mosquito populations are picking it up," she added.

According to the computer simulation, there is a high probability of a chikungunya outbreak if a single infected person arrives in New York in July or August and is bitten by an Asian tiger mosquito. The risks are the same, but with wider time frames, for transmission in Atlanta and Miami, according to the paper.

"The probability of an outbreak refers to the chance of the occurrence of a human to mosquito to human transmission event," said Diego Ruiz-Moreno, a postdoctoral associate in the ecology and evolutionary biology department and the paper's lead author. "When this number is over 30 percent, it could be said that such a probability is high."

The model estimates that with typical regional temperatures, a chikungunya outbreak in New York would infect about one in 5,000 people, he said. "However, this number would increase drastically as temperatures rise due to climate change," he added.

Ruiz-Moreno entered data in the model relating to, for example, epidemiological parameters for chikungunya, mosquito and virus biology and seasonality, and temperature data. Harrington and colleagues also quantified the probability of transmission of the virus between humans and U.S. strains of Asian tiger mosquitos for the model in the laboratory. A single infected human was introduced after the model simulated a full year of activity for each location and scenario.

The computer simulation could also be applied to such diseases as dengue fever that hold similar risks in the United States, Harrington said.

Since no chikungunya vaccine exists, New Yorkers may prevent an outbreak by removing standing water, wearing long sleeves and repellent during the day when the mosquitoes feed, and knowing the risk and symptoms when traveling, Harrington said.

The study was funded by a National Institute for Food and Agriculture Hatch grant and Cornell's Atkinson Center Climate Change and Disease Program.