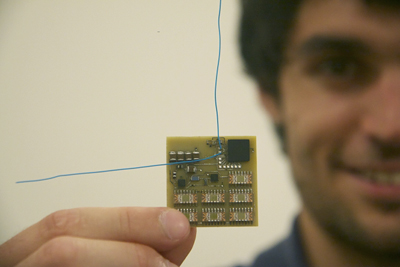 Rebecca Manchester
Zac Manchester '09 holds a prototype sprite, hundreds of which will fly into space as part of the KickSat mission.

It'll look like hundreds of postage stamps fluttering toward Earth -- each an independent satellite transmitting a signal unique to the person who helped send it to space.

A Cornell-based project called KickSat is set to launch more than 200 of these tiny satellites, nicknamed "sprites," into low-Earth orbit as part of a routine NASA-administered mission in 2013 to the International Space Station. And unlike traditional, big government space exploration, KickSat is truly a launch by the people.

Several years ago, then-undergraduate Zac Manchester '09, now a graduate student in aerospace engineering, dreamt up the idea of crowd-sourced, personal space exploration. He and Ryan Zhou '10 and Justin Atchison '10, in the lab of associate professor Mason Peck, designed and built a prototype spacecraft that fits in the palm of the hand and costs just a few hundred dollars to make. The sprites are a type of micro-satellite called a "ChipSat."

"We hope if this works out this could literally become DIY (do it yourself) space exploration," said Manchester, now completing an internship at NASA. Three sprites have already been to space -- aboard NASA's last Endeavour mission in May 2011 as a late add-on to the flight.

Manchester's goal, he says in his blog about the mission, "is to bring down the huge cost of spaceflight, allowing anyone from a curious high school student or basement tinkerer to a professional scientist to explore what has until now been the exclusive realm of governments and large companies. By shrinking the spacecraft, we can fit more into a single launch slot and split the costs many ways. I want to make it easy enough and affordable enough for anyone to explore space."

Sprites are the size of a cracker but are outfitted with solar cells, a radio transceiver and a microcontroller (tiny computer). KickSat, which is the name of the sprites' launching unit, is a CubeSat, a standardized cubic satellite the size of a loaf of bread, frequently used in space research.

Using Kickstarter.com to find sponsors for the mission, Manchester raised nearly $75,000 as more than 300 people sponsored a sprite that will transmit an identifying signal, such as the initials of the donor. In 2013, about 250 sprites will be sent into space. One person, who donated $10,000, Manchester added, will get to "push the big red button" on the day of the launch.

Manchester's Kickstarter campaign has covered the cost of the hardware, while NASA's Educational Launch of Nanosatellites (ELaNA) program, which provides a free launch (normally $300,000) for university space research, is actually sending the sprites to space. The KickSat will hitch a ride in September 2013 (subject to change) from Cape Canaveral on CRS-3, the third SpaceX Falcon 9 flight destined for the International Space Station.

The sprites will be housed in KickSat in spring-loaded stacks. Once in orbit, a radio-controlled lid will open, and out will float the sprites as free-flying spacecraft, transmitting signals traceable back at mission control on Ithaca's Mount Pleasant.

A large part of the project is helping people track their own satellites with a simple software radio interface. Some quick, off-the-shelf parts like an antenna hooked to a computer can become a personal tracking station, Manchester said. He already has volunteers from all over the world -- Japan, Africa and elsewhere -- who will track their own satellites and send him data.

From a research standpoint, Manchester is interested in the dynamics and behavior of the satellites, and plans to test how to track their positions and determine their orbits. All this, before the little satellites burn up in the atmosphere.