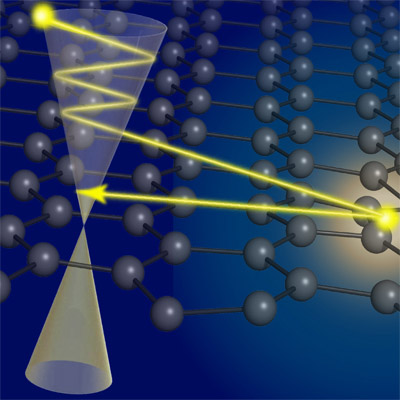 Matt Graham
An illustration of how a heated electron cools in graphene. The electron slowly cools by emitting regular phonons, illustrated by zigzags down a Dirac Cone (a visualization of graphene's electronic band structure). When the electron hits a defect, it bounces off the lattice - a "supercollision" - which speeds up the cooling process.

It's a basic tenet of physics that scientists are trying to explain in graphene, single-atom thick sheets of carbon: When electrons are excited, or heated, how quickly do they relax, or cool?

A research team supported by the Kavli Institute at Cornell for Nanoscale Science has shed some light on the topic through the first known direct measurements of hot electrons cooling down in graphene.

When electrons travel through graphene, they create a quantum lattice vibration, called a phonon. In doing so, the difference in energy the electron emits must equal the amount gained by the phonon; this is the "cooling" that happens as the system is returning to its equilibrium state, and this movement of electrons is at the heart of understanding how electronic devices work.

The new Cornell experiment supports a previous theory that electrons in graphene experience "supercollisions" as they cool -- they bump into defects in the crystal lattice, imparting their momentum to the defects, thereby making the cooling process much faster than if the graphene were a perfectly repeating crystal.

"The remarkable thing about the theory was it predicted all kinds of details, and it got it all right," McEuen said.

Watching electrons move through graphene took some novel experimental legwork. Graham and colleagues conceived a setup in which they shot very short laser pulses -- about 100 femtoseconds apart -- at a piece of conventionally grown graphene.

They observed the temperature of the graphene as it heated and cooled at a p-n junction, which is the interface at which electrons travel between two semiconductors. By tracking the magnitude of the current passing through the junction, they essentially used the junction as a tiny thermometer.

Heating the junction with an initial laser pulse, they hit it with a second pulse at specific time delays, comparing the crossover of temperatures. This technique allowed the team to measure the temperature of the system with sub-picosecond time resolution and within a few kelvins of accuracy. Their results agreed very well with the supercollision theory of the rate at which electrons cool in graphene.

The results provide further insights into the fundamental nature of graphene so it can one day be used in anything from photodetectors to non-silicon transistors, McEuen said. It is already well known that graphene shows promise for next-generation electronics because of its near-perfect conductivity, transparency and tensile strength.

The work was supported by the Kavli Institute, the National Science Foundation through the Center for Nanoscale Systems, the MARCO Focused Research Center on Materials, Structures and Devices, and the Air Force Office of Scientific Research.