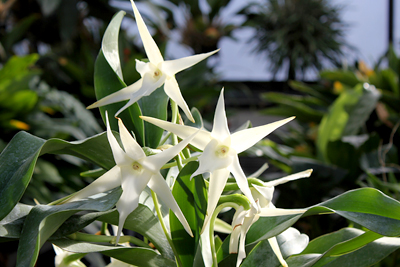 Craig Cramer
The nearly foot-long nectaries (or floral tubes) found on Angraecum sesquipedale led Charles Darwin to predict the existence of a moth with a tongue long enough to pollinate it. While many have described this as one of the most striking examples of co-evolution, debate about the moth-orchid relationship continues.

A star orchid is blooming on campus this week, but its story began 150 years earlier when Charles Darwin first observed the flower's foot-long nectary and famously wondered: "Good Heavens, what insect can suck it?"

Darwin's fascination with Angraecum sesquipedale -- and with answering this question -- led him to predict a species of moth with a proboscis capable of extending 10 to 11 inches, able to reach the flower's nectar reserves. To explain the phenomenon, Darwin suggested an arms race of sorts resulting in flowers with perpetually lengthening floral tubes, and moths with perpetually lengthening tongues -- a prediction that represents one of his major contributions to evolutionary biology.

Letters between Darwin and orchid grower James Bateman reveal Darwin was immediately captivated when a box of the orchids arrived in 1862. Paul Cooper, the greenhouse grower who cares for Cornell's specimen, also claims love at first sight.

Darwin's orchid is located in the Green Greenhouse 114 on campus, attached to Kenneth Post Lab on Tower Road. The greenhouse will be open to the public Dec. 5-7 from 9 a.m. to 3 p.m. Visitors to the greenhouse can also see 'Wee Stinky,' the rare titan arum plant that bloomed this spring, in its fruiting stage.

"I first noticed the orchid while I was watering," says Cooper. "When I learned the story behind it, I got a little obsessed."

Cornell's orchid has been in its collection for more than a decade and is housed at the College of Agriculture and Life Sciences' Kenneth Post greenhouse, managed by the Cornell University Agricultural Experiment Station (CUAES). Generally slow in reaching maturity, this orchid has been flowering for the past few years and boasts about two dozen blooms, Cooper says.

An epiphytic plant endemic to the coastal forests of Madagascar, A. sesquipedale blooms from June to September in its native habitat, but usually peaks between December and January in North America and Europe. Also known as "Darwin's orchid," the flower's timing and its star-like appearance have led people to call it the "Christmas orchid" or "Star of Bethlehem orchid."

As with many night-blooming orchids, the flowers of A. sesquipedale are white, and its scent is strongest at night when its pollinators are on the move. And pollination is performed almost exclusively by the very insect Darwin first imagined: A hawkmoth with a proboscis long enough to reach the orchid's nectar. The species, named Xanthopan morganii praedicta (or "predicted moth"), was discovered in 1903, but not witnessed feeding on the orchid until 1992.

Professor of Neurobiology and Behavior Robert A. Raguso says hawkmoths' long tongues grant them entry to most flowers. "In Madagascar, they drink from tiny lantana flowers as well as the huge hibiscus-like blossoms in the canopies of baobab trees," he said. "The orchids may indeed have arrived late on that scene."

Raguso's lab uses the orchid's floral scents to study smaller-tongued relatives of the hawkmoth, and how they use fragrance to find and pollinate evening primroses and nocturnal tobaccos. A recent study from his lab showed for the first time that some pollinators may prefer flowers with slightly higher humidity levels, as remote indicators of the presence of nectar. "From the moth's perspective, the white, perfumed flowers are billboards promising nectar at the bottom of that long spur," Raguso says.

"The fact that the orchid's mysteries are still unfolding is a big part of what makes this flower so special," Cooper adds. "Plus, it is truly glorious for just one short week of the winter each year. I encourage everyone to come see it."