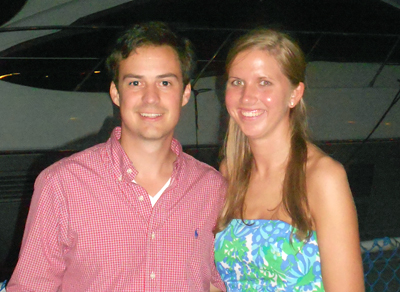 Before Sam Scott's wedding this past August, his Zeta Psi fraternity brother Jason Kats '10 started asking some strange questions; Scott found out why when he received an unusual wedding gift: an endowed fund, established by Kats for Cornell's American Indian Program (AIP) in honor of him and his bride, Barrett.

The endowment will provide perpetual funding to cover expenses for Native American students to study abroad and participate in research, conferences or internships. It is the first endowment for the AIP, which celebrates its 30th anniversary this year.

Scott '10 is Native American on his father's side, but said his family never identified strongly with their Algonquin ancestors. For Scott, finishing his ILR School degree took precedence over learning more about his native heritage.

"I had to graduate in three and a half years for financial reasons," he said. "Every summer, I had two jobs. It was the only way I could afford to stay in school. It would have been nice to have this kind of scholarship."

Jolene Rickard, AIP director and associate professor in the Departments of History of Art and of Art, said she sees a lot of students who don't have extra funds to create connections to the professional world that can help sustain them after leaving Cornell.

"In our 30 years, Cornell has made its commitment clear by supporting this space for sharing ideas and community among Native American and other indigenous students. This endowment is really going to make a difference in these students' careers -- bridging that gap for the most needy, to provide opportunities they wouldn't otherwise have. This is a big step for us," said Rickard.

Scott said, "Jason's always been a behind-the-scenes worker." True to this description, Kats has quietly made two other endowment-level gifts to Cornell in the past year. Kats recognizes this is rare for a recent graduate.

"For several years, I've been on this journey to discover how life's resources should be best apportioned and what I should do. ... Most people contribute in their 40s or 50s, when they feel they have enough materially. But the increase in utility of having an extra dollar decreases the more you have. I may lose money over five years, but that money goes into an endowment that will pay dividends over many years, so I derive much more utility from that money than I could just saving it," said Kats.

Above all, Kats' gifts honor the people who created a supportive community for him at Cornell. This philosophy, said Rickard, echoes one of the AIP's guiding principles: reciprocity. Rickard said the program has an obligation to teach students how to advance their personal interests through giving back.

"We encourage students to think about how to transfer their research interests to people today, in particular, to native communities," Rickard said. "With the endowment, we hope to support projects that can help return knowledge to these communities, supporting and energizing their well-being."

Kats said he'll continue supporting programs that allow people to improve themselves, their situations and their capacity for giving in turn. He hopes that his generosity will spark more alums to donate. "At the end of the day, it's when you honor others through the gift that gets people personally involved," he said.

As for Scott, he plans to practice his own form of reciprocity once he finishes law school. "Since middle school, my goal was to be a public defender. I've been blessed in life with so many chances; I want to offer that to others," he said.

Sarah Thompson is a freelance writer based in Trumansburg, N.Y.