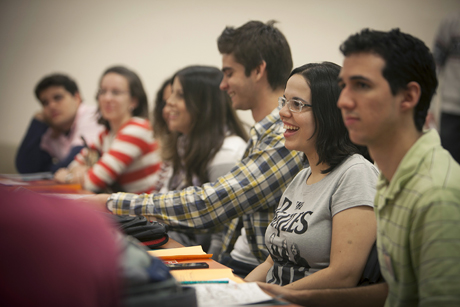 Jason Koski/University Photography
Anna Israel, center, and fellow students from Brazil learned about Cornell at a session welcoming them to the Ithaca campus.

Luisa Zigmantas is anticipating an exciting year ahead at Cornell.

“It’s exactly to my expectations,” the electrical engineering student from the interior of Sao Paolo, Brazil, said. “Everything here is spectacular. I’m amazed at the natural beauty here; the waterfalls in town, it’s like a movie.”

She is one of 27 newly arrived students from Brazil, here under the auspices of Academia do Brazil em Cornell (ABC). The pilot program is part of an initiative expanding educational opportunities for Brazilian citizens.

The Brazilian government's Ciência sem Fronteiras scientific mobility program is funding the initiative and all student expenses for two semesters at about 40 participating schools across the United States.

Zigmantas has petroleum industry research experience in Brazil and said she’d read about Cornell engineering students doing “independent research in parallel to the courses they take. I look forward to doing that in the second semester.”

“It’s a wonderful opportunity to internationalize the Cornell campus by bringing this group of Brazilian students here,” said Alice Pell, vice provost for international relations. “They are clearly a talented, energetic group of people, and they are engaged and excited.”

About half of the students are in engineering fields; others are in science and technology majors, biological sciences, information science, urban planning and film.

Tarik Carvalho Bussab of Sao Paolo will complete his mechanical engineering studies at Brazil’s Technical Institute of Aeronautics after leaving Cornell in December. “My school is very good, but it lacks a little in practice,” he said. “I hope to have the chance to learn by doing, and apply mechanical principles. I also expect to meet a lot of people from other countries; we always learn a lot from [each other].”

“He said Brazil will need 150,000 to 200,000 people with engineering and science degrees within the next 15 years,” DeVoogd said. “I went over to the Brazilian consulate that day and talked to them about the program, to work toward that goal by placing students abroad.”

The deadline for new transfer students passed in October, but DeVoogd elicited support from Provost Kent Fuchs, who approved guaranteed placement for up to 75 students starting this semester and funded a half-time assistant to handle logistics including travel arrangements, admissions in four colleges and “answering hundreds, maybe thousands of emails,” DeVoogd said. The students also set up a Facebook group to help each other with questions about Cornell. DeVoogd said his next task will be arranging for their summer internships. 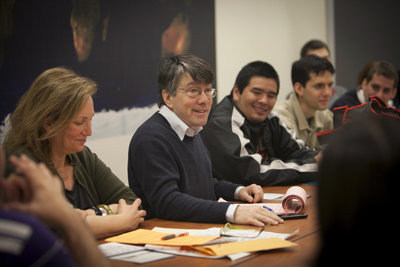 Pell, DeVoogd and program manager Julie Simmons-Lynch provided advice and assistance to 24 students at a meeting Jan. 15, their first day on campus.

“We want this semester to go well and want to provide every opportunity to these students to succeed,” DeVoogd said. “The program was brought up as a way to internationalize Cornell, in a discussion with the provost and deans. It is designed to be egalitarian, giving a chance to any student at any university, even those from poor families … the Brazilian government is hoping to place 25,000 students a year in the United States.”

Anna Israel of Rio de Janeiro, one of three film students in the program, said: “I want to get to know the people, the place. You learn a lot about the subjects and the culture, and you also learn a lot about yourself. It’s an inner process and an outer process as well.”

“With [President] David Skorton’s initiative in bringing Cornell to the world and bringing the world to Cornell … it’s very important that we have students from around the world represented on campus,” Pell said. “I think that we all will benefit.”